The Golden retriever is one of the most famous dogs in the US. Originally from Scotland, the retriever was used in hunting sports to collect shot ducks and other fowls. Besides their adventurous and playful nature, they were also loved for their soft mouths that could carry the game without injuring them.

Golden retrievers favor well in both suburban and countryside environments. Their double-coated fur allows them to withstand both cold and warm climates. They thrive the most in surroundings that enable an active lifestyle and a lot of time spent outdoors. Retrievers enjoy being taken for walks, playing fetch, and they also like challenges that exercise their minds.

They are a devoted, friendly, loyal, and intelligent breed popularly used as disability assistant dogs for blind and deaf people. Also, they are trained to participate in dog shows and competitions, drug detection at search points, search and rescue missions, and, of course, in hunting.

How to Choose Between a Male and Female Retriever?

You have probably already started imagining a life with your beloved retriever. But now you’re wondering how to choose between the male and the female. Not to worry, there’s no right or wrong choice. It is just a matter of your preference. As with all species, there are differences between males and females. We are going to delve into some of the subtle as well as apparent differences between them.

Much like other mammals, the female Golden retriever has ovaries and a uterus that is conducive to bearing pregnancies, while the male counterpart does not. The Golden retriever’s genitalia is located near the hind legs. Do not be surprised, however, to find nipples on a male Golden retriever. They are not an abnormality, but rather a familiar feature on most dog breeds. The nipples are present the male species since they develop early before the puppy’s gender is determined.

Structurally, male Golden retrievers generally have broader heads, thicker ruffs, and more prominent muscular features. The females have a finer-boned appearance, especially on their skull and head. Another physical difference between the two is the appearance of their coats. The males’ fur coats are more extended, bushier, and fuller in comparison.

Temperament difference is quite subtle with the male and female Golden retriever specie. According to Ann Johnson, a zoologist, and an award-winning breeder, male retrievers have a “survival trait” associated with their ancestors. This trait essentially means that male retrievers tend to worship pack leaders. This trait is evident in how they relate to their owners; they are attentive to their owners’ feelings and moods.

Their female counterparts, on the other hand, do not possess this trait. Not to mean that they aren’t affectionate, but instead, they don’t go out of their way to please their owners. In comparison, female retrievers are more independent and territorial than males. So if you’re looking for that extra love and attention from your dog, then the male Golden retriever is your best bet.

Another difference in personality is the aggressiveness of the male retriever. Although not harmful, males are more likely to fight and get aggressive with each other. Females, on the other hand, are mostly calm, unless they perceive a potential threat to their social hierarchy.

While spaying and neutering are the dog owner’s personal choices, you must understand the side effects entailed, especially when the Golden retriever is concerned. Most people spay and neuter their dogs to control breeding and reduce aggression.

However, according to a study conducted at the University of California, the Golden retriever is likely to have a 20 to 25% chance of contracting joint conditions (hip and elbow dysplasia) if neutered or spayed before they attain six months of age. On the other hand, if spayed after six months of age, the female retriever’s risk of getting cancer is three to four times higher than that of the male counterpart.

Experts recommend that a dog owner should instead desex their dogs rather than neutering or spaying them. Desexing ensures that the females don’t get pregnant but still retain their ovaries to produce hormones, hence not altering their health and well-being.

While the Golden retrievers’ lifespan is the same and ranges from 10 to 12 years, various health issues can affect the different genders. For instance, a female retriever spayed after six months of age is most likely to get cancer, resulting in early death. The male retriever, however, may not be quite at risk in comparison.

According to Dr. Ian Dunbar, a Ph.D. veterinarian and expert dog behaviorist, female Golden retrievers are a lot easier to manage when it comes to training. They can concentrate better than the males who require treats to keep them motivated. Studies also show that male retrievers are likely to be disobedient as compared to females.

However, this is not to mean that the males are an unruly lot. With a little training, both genders can be equally obedient. It is also beneficial for your relationship to ensure that you spend adequate time with your retrievers to build a strong bond. Golden retrievers are an affectionate breed, after all.

The choice of which gender is right for you is essentially yours to make. If you want a fun dog to train, then a male is your go-to, but if you’re looking for obedience, then the female is the better choice.

The estrus cycle refers to the period when female Golden retrievers are at their prime mating season. During this season, the females are more receptive to mating than any other time. This cycle occurs once every six months only in the females.

If you don’t want to mate your retriever, it is best not to expose her to any males when she is undergoing this cycle. However, if you’re looking to grow your pet family, this is the opportune time, as she’ll be very receptive.

There is no clear cut difference between the male and female Golden retrievers that can make the decision any easier for you. It all depends on your personal preference and your reason for getting a furry buddy in the first place, i.e., whether for companionship or breeding.

As a potential owner, you will be glad to know that Golden retrievers are also friendly to children, other dog breeds, and any other pets you may own. There is a good reason the Golden retriever has gained popularity over the years, after all. 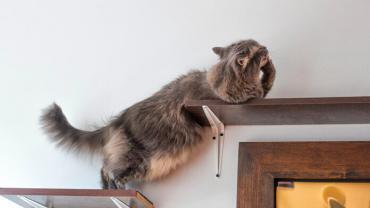