On average, a Golden retriever’s lifespan is from 10-13 years, but there are steps you can take to increase your pet’s lifespan. Factors taken into individual dog lifespan calculations include analyzing their genetics, such as how long their parents and grandparents lived. Any health conditions that your pet has, as well as what you feed them, can also play a key role in determining how long they will live.

Interestingly, British Golden retrievers tend to be on the further end of the average lifespan while American Golden retrievers usually live for around 10 years. Canadian retrievers sit in between the two, averaging an 11-year lifespan. Therefore, your retriever’s subspecies also plays a role in how long you can expect them to be around.

So you’ve got yourself an adorable puppy, but as a new pet owner, you’re not entirely sure what to expect? Don’t worry. While the behavior of a Golden retriever pup often depends on their personality, there are a number of things you can expect from your fur baby in the first stage of life.

The puppy stage usually begins after 63 days of gestation in dogs. For Golden retrievers specifically, gestation lasts on average 59-65 days. Dogs remain in the puppy stage until they are 6 months to 18 months old, and will change a lot in their size and weight during this time. You might find a Golden retriever growth chart on the internet, and this will allow you to check your pet is the right weight for their age.

For the first eight weeks of their lives, puppies should remain with their mother and siblings. While they are puppies, dogs learn everything about interacting with their mother, siblings, other dogs, other animals, and humans. Important vaccinations are available during puppyhood to ensure your dog is protected from illnesses he may encounter in his environment when he ventures outside. Booster vaccinations will be regular throughout their lives, but their first complete set of vaccines as puppies is essential. It would be best if you keep your puppy indoors or only in your garden until they have received their set of essential vaccines.

During the puppyhood stage, it’s vital to begin their housetraining but also their command training. Beginning to do so early on will help to prevent your puppy from regularly making a mess in your house. Teaching your puppy to follow commands early on will help to stimulate their learning and make the rest of your life easier as they get older since they will already be able to understand your commands. This is important as a much bigger dog who doesn’t listen has the potential to be a much bigger hassle and cause more trouble than a tiny puppy!

You can expect your dog to chew (a lot!) during this stage of life as they begin to lose their puppy teeth and their adult teeth begin to come through. During this time, you may notice your puppy tends to nip and mouth at you more. Teething can even be painful for some puppies. They’ll often show this by not only chewing a lot but whimpering at the same time.

The best thing you can do for your puppy here is to buy them various chew toys and encourage them to chew these, while scolding them for chewing things they shouldn’t – like skirting boards, wires, garden lights, and shoes. The teething stage can really test your patience, so it’s important to remember just how difficult human babies can also be during this time. You will eventually see the other side!

Another thing you may find is that your puppy cries during the night and when you leave them. Usually, dogs like Golden retrievers will eventually grow out of this behavior as they age so long as you do not reinforce this behavior by allowing them to sleep in your bed, et cetera.

If your puppy is relentless, however, it may be worth sleeping downstairs on the sofa while they are in their pen next to you for a few nights until they become used to their new environment. You can buy fluffy toys that have hot water bottle fillings to give to your dog to sleep with at night, as often puppies miss the warmth of their mother and siblings when they first move into their new homes. Again, patience is vital for pretty much the entirety of puppyhood – it’s almost like having a baby!

Sometime between 6-18 months, the puppy stage will give way to adolescence. As Golden retrievers are larger dogs, they usually enter adolescence later than smaller dog breeds. This is when the hormones begin to kick in, and you’ll find that your male dog will begin to mount everything in sight.

If you have a female pup, you may notice she’s going into season where she is able to conceive puppies. You should definitely consider spaying/neutering your pet in this stage if you’re not going to breed them – especially if your male dog becomes aggressive or your female dog starts being disobedient and suddenly attempting to escape.

Spaying/neutering your pet will not only prevent unwanted pregnancy, but it will also make your dog more relaxed and calm, and less like a moody teenager! Obedience training is also very important during this stage, and you should continue to build on the initial training you began in puppyhood to ensure your pet is well-trained. Training can make this period of their lives much easier to deal with.

Your dog will enter the adult stage of life between 1-3 years. They will still enjoy plenty of exercise and playtime, but be less ‘needy’ of your attention. You’ll find that your furry friend may have less frequent episodes of the ‘zoomies,’ as well as being a more independent pooch. While your pet may be pretty much fully house trained and obedience trained, there are many things you can consider doing with them, especially if they’re an active breed.

An example of this is agility training, which involves training your dog to complete an obstacle course in a particular order. This training type will keep your older dog stimulated after he’s completed his basic training. It will also ensure that he doesn’t get bored and become problematic. It’s also a pretty good way of tiring your dog out, and even yourself! Keeping your pet engaged by methods such as these will ensure he is both mentally and physically thriving.

Your dog is likely to be calmer around children, becoming more protective when he originally was just a playmate. This is usually the case with the Golden retriever personality as they are very nurturing and gentle breeds, especially females.

Between 6 to 10 years of age, Golden retrievers will enter the golden years of their life. This is the only stage that larger breed dogs enter before smaller dogs. You may notice that your dog’s muzzle and eyebrows begin to gray, reflecting their age. Your furry friend will also prefer to stroll rather than run. Senior dogs often eat less and sleep more, so if you notice this kind of behavior in an older dog, there’s no need for concern.

During this stage of their lives, dogs will often need less physical exercise so you may want to reduce the frequency of their walks. Despite this, there’s no reason why your old dog can’t learn new tricks in exchange for a favorite treat. This is a good method of keeping your pets mentally stimulated when their body doesn’t allow them to move as much as they used to. You may find your dog prefers to cuddle up to you on the sofa or sleep around your feet, and we’re sure you’ll enjoy giving and receiving all this extra attention from your lazy old friend.

Of course, when they reach this stage, you should arrange veterinary appointments if you ever become concerned about their behavior or that they might be in pain. Still, keep in mind that slow movement and less willingness to exercise are common behaviors of older pets.

Ways to Lengthen Your Dog’s Lifespan

Due to illnesses like cancer or accidents, sometimes there is nothing we can do about our beloved pets being taken from us too soon. However, there are numerous ways you can increase your Golden retriever’s lifespan, such as;

There are no guarantees when it comes to the amount of time you’ll spend with your furry friend. While there are factors you have no control over (like genetics), there’s still a lot you can do to extend their lifespan.

Keeping a healthy weight and a balanced diet will significantly reduce the risk of hip and joint problems, as well as reduce the risk of cancer. On top of that, regular vet checkups, lots of exercise, and lots of love will ensure your four-legged companion stays around as long as possible. 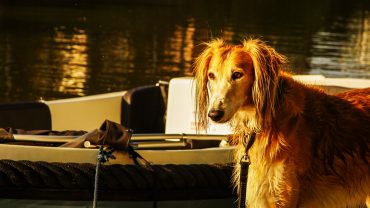