Dogs are incredibly active pets. That’s part of why we love them so much – which is why it can feel incredibly wrong and worrying if your dog spends a lot of time coughing and gagging. That’s problematic for anyone, of course, but given how fit and active dogs often are, to see them sputtering and gagging can be a huge cause for concern.

So stop frantically Googling “why is my dog coughing and gagging?” and take a calm and collected look at some of the symptoms, signs, causes, and treatments for dogs that are gagging and coughing.

While the most obvious “symptoms and signs” here are obviously gagging and coughing, those two things can obviously be applied to a wide range of conditions. However, there are certain signs that the coughing is more than a mild issue or that it and the gagging is more than a passing thing.

Some of signs and symptoms that should be cause for concern are:

As the name would imply, this is a cough that can result from your dog being kept in a kennel. The proper name for this condition is infectious canine tracheobronchitis, and it refers to an inflammation of your dog’s bronchi and trachea, and tends to be characterized by deep, honking coughs. That said, “kennel cough” covers a wide range of potential infection possibilities, from pathogens to viruses.

If your dog has recently been in a kennel, at the groomer’s, or someplace else where they may have met and contracted a condition from other dogs, this catch-all condition is a possibility.

Just as kindergartens and daycares can be a breeding ground for germs among young kids, the same holds true for dogs in these settings. Thankfully, “kennel cough” in its many iterations is often contagious but rarely serious.

As long as your dog still has a healthy appetite and is mostly acting like itself besides the cough, your dog should be fine again in a few days. If it is not, you’ll want to take your dog to the vet to see if something more is going on. Your vet may also examine your dog to see if it needs a course of dog antibiotics or cough suppressants.

This is an obvious consideration, since coughing and gagging can be directly connected to lung issues in just about any animal with lungs. If your dog has a fever, nasal whistling, and wheezing in addition to some of the other dog coughing symptoms mentioned above, dog pneumonia is a possibility, especially if the weather is cold or damp. This is especially true if your dog’s cough is wet and produces fluid.

If your dog has a case of pneumonia, your vet will likely prescribe a course of antibiotics or other medical treatments and track your dog’s progress throughout the next few days.

The most important thing to know about this potential cause is that it is more common in certain breeds than others. The King Charles Spaniel has the unfortunate distinction of being among the most well-known cases of dog breeds that are more susceptible to heart disease. Other breeds include the Dachshund, Golden Retriever, Labrador, Boxer, Miniature Poodle, Doberman Pinscher, Great Dane, Schnauzer, and Irish Wolfhound.

If your dog is among those breeds, there is an elevated risk that its coughing may be tied to heart disease. These dogs are genetically predisposed to be more likely to inherit conditions that can develop into heart disease as they grow older. For example, they can develop mitral valve disease, which isn’t as apparent when they are young but can become painful once they start to age.

If you have a dog that is genetically predisposed to heart conditions, it is vital that you get advice from the vet on how to mitigate that risk, prevent it if possible and, if they already have it, learn how to deal with it.

This is another heartbreaking possibility, and one where the coughing and gagging obviously plays second fiddle to the main issue. There is no cure for cancer in dogs or humans, so the best you can do if this is the case is to try and get your dog’s cancer diagnosed and treated as soon and as comprehensively as possible.

For dogs and humans, with cancer, time is of the essence.

This is a specific kind of infection that can plague not just dogs but a wide range of mammals, including ferrets, skunks, raccoons, and grey foxes. If your dog has started to show some of the aforementioned signs of coughing and gagging being a problem and has been in contact with one of these animals lately, it’s probably a good idea to have your dog checked out.

Contact with bodily fluids such as blood, saliva, or urine is a main cause of infection with canine distemper. Thankfully, this is a condition against which your dog can be vaccinated.

The infection can also spread via contaminated foodstuffs, and is most prevalent when the weather turns cold. Even more concerning than the coughing or gagging are the potential neurological symptoms of canine distemper – including twitching, circling, involuntary eye movement, and paralysis – so it’s essential to get your dog vaccinated as soon as possible. Most puppies are ready for vaccination after six weeks, but ask your vet to be sure.

This is another case of your dog’s coughing and gagging being a sign of more serious problems. On the positive side, canine influenza is very rare in countries such as the United Kingdom and much of the United States. That said, it is still important to have your dog vaccinated against it.

Canine influenza is characterized by symptoms such as a fluid-producing cough, a runny nose and sneezing, and a high temperature. If those sound like common symptoms, they are, which is why you’ll want to take your dog to the vet before you panic.

Above all, you must separate your dog from any others you may have or may come across, because on the off chance your dog has it, canine influenza can be highly contagious. That said, it is only contagious to other dogs, and there are no known cases of humans getting it from their dogs.

This is another fairly obvious explanation for why your dog may be gagging or coughing. If your dog has swallowed or inhaled something that has “gone down the wrong pipe” or lodged itself in part of its throat, of course your dog is going to cough – we all would. That said, it’s obviously essential to make sure your dog isn’t choking.

In addition to swallowing and choking or gagging on a foreign object, this can also cover coughing that occurs after your dog has inhaled an allergen.

For example, if they are allergic to pollen and inhale some, it isn’t unusual for some coughing to ensue.

Officially known as “chronic obstructive pulmonary disease,” this results from the mucous membranes becoming inflamed, which in turn can lead to chronic, lasting, and typically dry coughs.

However, it can be hard to identify in smaller breeds, such as Cocker Spaniels and West Highland White Terriers, who can also unfortunately be among the most susceptible to it. Once again, you need to have your dog checked out by a vet.

As the name would imply, this kind of dog coughing problem is chronic in nature and thus requires a long-term solution. Thankfully, there are a variety of treatments available for chronic bronchitis, as described below.

This is yet another condition when small dogs are more at risk. Collapsed trachea can occur when the cartilage rings that partially encircle your dog’s trachea begin to weaken, which in turn results in the, no longer being able to support it, hence the narrowing and potential collapse.

Obviously, a more constricted air pathway is very bad for your dog and something that needs to be addressed immediately.

This is a rarer cause, and if you have never encountered it with your dog before you might well wonder, what on earth is a reverse sneeze? A reverse sneeze can occur when something causes your dog’s throat as well as its soft palate to spasm, causing your dog to cough.

There are a variety of potential causes of this, from tight collars to allergens and everything in between, but whatever the cause, it is typically quite mild and does not require a trip to the vet.

This particularly unpleasant cause of coughing and gagging in dogs can be caused by the larvae of intestinal parasites such as certain worms taking up residence in your dog’s lungs, often by migrating from their intestines.

Needless to say, you’ll need to take your dog to the vet to have these expelled as quickly and painlessly as possible.

If your dog is suffering from a narrowing or collapsed trachea, there are several treatment options available to you. For example, you can purchase medications that can be inhaled, such as bronchodilators such as albuterol and salbutamol. You will also want to keep a close eye on your dog’s weight to ensure that it does not get too heavy. Inhaled steroids and other ways of decreasing inflammation can be helpful.

These kinds of inhalation-based medicines can also be helpful when dealing with chronic bronchitis. Many of the conditions resulting from various bacterial or viral infections listed here can be treated with antibiotics. These can range from general antibiotics to more specific medicines for specific conditions.

In the case of an allergy or a parasitic creature, you’ll naturally need to have the cause of the problem physically removed from the dog’s surroundings and, if necessary, from their lungs, throat, or other part of its body. The sooner you do this, the better.

Above all, one of the most important things you can do when treating your dog for a cause of coughing and gagging is to take your pet to the vet. If the above list demonstrates anything, it’s that dogs can cough or gag for a wide variety of reasons. You thus need to have an expert on hand to help you tell what’s going on and how to treat it.

From the mildest cough to the most severe causes, a quick consultation with a vet and following their treatment plans can help your dog feel faster sooner. 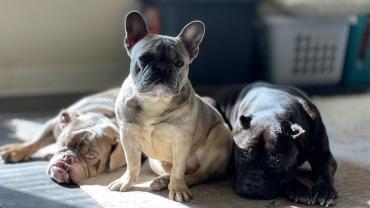