Home
Pet Care
Why Is My Dog Wheezing

You come home from work after a tiring day, and see your dog jumping around the house with all the excitement in the world. But suddenly the barks turned into a wheezing sound, and it seems that the dog is unable to breathe. Eventually, the animal starts snorting, and calms down.

Why is this happening? Wheezing is defined as a whistling sound made when someone is breathing. It makes your breath laborious, and seems as if the person is having difficulty in breathing. Asthma is defined as one of the most common reasons for wheezing, but there are several other reasons.

Why Does Wheezing Occur?

The airways are generally quite sensitive in our furry pawed friends. These airways should expand and contract accordingly to allow oxygen into the lungs. If, however, the airways cause a problem, they may not expand enough, and the oxygen will have to find a narrow path to find its way through to the lungs.

Just like humans, dogs are also at a risk of developing asthma. This happens when the upper airways (which are larger in diameter), tend to constrict or undergo spasms. When dogs contract asthma, it’s generally referred to as allergic bronchitis. In most cases, your dog may suffer from this condition due to an allergic reaction caused by an element in their environment.

For instance, the most common cause of asthma in dogs is smoke from cigars or cigarettes, or the smoke from a wood-burning stove or a fireplace. The aromas released from deodorants and air fresheners is also likely to cause irritation and cause constriction in their lungs. Your dog is also likely to be at an increased risk of bronchitis if it’s young or middle-aged.

Don’t think that older dogs are immune, though statistics do show that smaller dog breeds are more susceptible to this problem. Thankfully, asthma is not difficult to treat in dogs. It can be treated using conventional medication (it’s best to visit a vet for treatment). However, if it’s chronic, you need to take action quickly. Other symptoms caused by asthma include a dry cough, or serious problems with respiration.

Dogs can also be allergic to simple things such as pollen or cigarette smoke. This can eventually cause a constriction in their airways, preventing them from breathing properly. Some dogs are also likely to develop allergies due to an insect bite or a sting. If you notice your dog is wheezing but also licking or itching one part of their skin, there is a pretty high chance that the problem is caused due to a bite or sting.

In certain situations, you might even notice a runny discharge being released from the animal’s nose or its eyes. Your dog may start vomiting or diarrhea can be a problem as well. Allergies are quite common in almost all dog breeds, and are most likely to manifest between the age of six months to two years old.

You cannot rule out the possibility of infections. There are quite a few upper respiratory infections that your dog can succumb to, which could lead to nasal discharge, irritation, coughing, and wheezing. It might be accompanied with a low fever as well. If your dog is constantly panting and seems out of breath, you might want to take it to a vet.

If your dog is rapidly losing weight despite eating normally, but its coughing and wheezing continues to grow, you may want to consider the risk of parasites. Other symptoms of a parasitic infection include lethargy, vomiting, regurgitating food items, aspiration of food, or the presence of worms in your dog’s stool.

A lower breathing rate is also a serious problem. There are several different kinds of parasites that could impact the respiratory tract of your dog and eventually cause wheezing. You need to take the animal to a vet and they will prescribe appropriate medication for dealing with the parasitic infection.

Apart from the incessant wheezing, other symptoms of bronchitis include a dry hacking cough that’s triggered due to stress or excessive exercise. This puts undue pressure on the dog’s trachea, and this could cause retching or gagging. It also leads to serious lethargy, and you will be able to notice your dog having serious difficulty in breathing.

If your dog is obese, it could cause a bit of a complication and significantly increase the animal’s risk of contracting bronchitis.

Another common cause of dog wheezing is kennel cough, a highly contagious disease that attacks the respiratory tract. Dogs usually contract kennel cough from dog parks, day care centers, or walks with other canines. It’s most likely caught from a kennel, which is why it’s called “kennel cough.”

A strong cough is perhaps the most common symptom, and it’s usually accompanied by lethargy, sneezing, and serious wheezing. In some cases, your dog might develop a mild fever as well. If it’s a mild attack of kennel cough, treatment simply requires a couple of weeks of rest.

However, if the problem is serious, your vet may recommend giving your dog some cough medication. Antibiotics are generally preferred because they can help prevent other infections as well. It might be a wise idea on your part to get the dog vaccinated properly to prevent such issues.

Take the Dog to a Vet

If the wheezing continues for several days and shows no signs of abating, you need to take the animal to a vet. Remember, while most types of wheezing are not fatal at all, they could cause serious difficulty for the animal. Do not offer self-diagnosed medication to the pet, as you may end up causing more harm in the process.

Let a vet treat the dog properly and see what’s wrong. These are just a few things that you should know about wheezing in dogs. 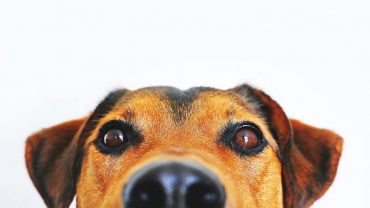