Yorkies are a type of dog that is known as a designer breed of dog. They have parent breeds that may have been working dogs in some capacity, as terriers were historically relied on to dig holes for hunting purposes, but the dog’s purpose has altered from working to having a desirable appearance. As such, there are a lot of variations in the yorkie’s appearance as people want the most adorable companion that they can have.

By the standards set by the AKC, there are four recognized base colors that a yorkie can have. Since most Yorkies have more than one color in their fur, there are a few different combinations that can be developed. Not all combinations of color are officially recognized by the AKC, though, which is important to keep in mind if you are considering preparing your dog for shows.

Unofficial color patterns add more variety to yorkies, meaning that there are going to be more that you can choose from for the optimal dog to have around the house if you aren’t planning on having a show dog. For many people, this is the optimal approach to consider.

What to Know About the Puppy’s Fur

One of the most important things to keep in mind when thinking about yorkie colors is that a yorkie’s coat isn’t fully developed until about two or three years of age. They will retain a black and tan coloration when they are born and the color of their fur will shift over time to meet their adult fur pattern. This means that you cannot necessarily count on a yorkie’s coat being exactly the same as it was when it is a puppy.

Be mindful of breeders who try to guarantee what color the yorkie’s adult coat will be. While genetics absolutely plays a role, there is always the chance of genes changing, leading to a surprise when the yorkie’s true colors show, literally. Breeders who refuse to acknowledge the chance of this are not breeders that you should trust, as they are either not knowledgeable about the dog they are breeding or are intentionally trying to mislead.

With that being said, almost all yorkies are born the same color, regardless of parents and regardless of what color they will be as adults. They will be born as black and tan, though some may have more black than tan and others may have more tan than black. The tan usually fades out into gold or remains tan, while the black will either remain as black or fade into blue.

What Are the Main Colors for a Yorkie?

As mentioned, there are four colors that are officially recognized for the yorkie to have, with those being black, blue, tan, and gold. The dark colors, black and blue, will stay on the dark part of the puppy’s coat and the light colors, tan and gold, will remain on the light part of the puppy’s coat. A puppy will not have the tan portion of its fur develop into black; likewise, the black portion cannot develop into tan.

This means that there are four different color combinations for yorkies to have as adults. These include black and tan, black and gold, blue and tan, and blue and gold. Black and tan is by far considered to be the most common and recognizable coloration, and are the colors that people usually think of when they first imagine yorkies.

What Causes the Shift in Color?

The shift in color, such as from black to blue, comes from a gene that can be passed down from parent to puppy that is known for premature greying. Dogs who remain the original color, black and tan, are not going to have a single copy of the greying gene. Likewise, dogs that shift to blue and gold will have two copies of the gene.

You can sometimes tell if a dog is going to have this gene before the color shifts, as you cannot always rely on inheritance to promise that the dog will have the same colors as the parent. Typically, dogs who have at least one copy of the gene are going to have coats that are darkest near the root rather than being one single color throughout, though this can be seen better when the dog’s fur is clipped close.

There is a rare chance that a yorkie may be born blue, but this is not cause for celebration. It is exceedingly rare that this happens, though when it does, those puppies don’t usually make it to being one year of age, as it seems something gets crossed in the genetics. On the off chance that a blue-born yorkie does live longer than a year, it develops many conditions that make it so that the humane choice is often to put it down. Never trust a breeder that advertises a blue-born yorkie as being the best.

What About Rare Colorations?

These colorations are considered to be the breed and show standard, but that doesn’t mean anything against genetics and people who simply want yorkies for the sake of having a cute dog, rather than a show dog. Rare colorations include red-legged yorkies, parti yorkies, and all-black yorkies.

Parti yorkies follow the original blue and gold pattern, but tend to have white thrown into the mix. This is the only rare coloration that is officially accepted by AKC breeding standards, and it is pretty rare to happen. It is theorized that this combination stems from the early inclusion of the Maltese as a breed mixed with the yorkie.

Red-legged yorkies are an interesting look into genetics, where both the parent dogs have to have specific recessive genes that tend to “skip” generations, meaning that they won’t show in some dogs even if they have both copies. Rather than a puppy’s tan changing into gold, it shifts to red. These dogs also cannot be registered as show dogs. 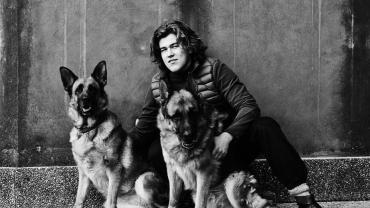