For millions and millions of people all around the world, hummingbirds are a sight to behold. Their uniquely shaped bodies and stark colors are sought after by gardeners, birdwatchers, and people who enjoy having a scenic backyard alike. If you find that you are interested in bringing the hummingbirds to your backyard, it will help you tremendously to know the hummingbird species in the area.

In addition to helping you pick out the best flowers and feeders for your local hummingbirds, this information will also help you know when hummingbirds are going to be in your area. Some people are surprised to learn that quite a few different species will migrate throughout the year, especially in colder states such as Michigan.

When most people think of migratory creatures, they think of two of the most iconic: monarch butterflies and Canadian geese. While these are very common creatures who have distinctive migration patterns, there are quite a few more animals that migrate as the seasons change. In fact, most animals that migrate are birds, as they need to follow their food source.

Because most birds, especially hummingbirds, derive their food from flowers, insects who are attracted to flowers, and seeds that come from fruits and flowers, it makes sense that as the months get colder in the United States, the hummingbirds need to move somewhere where they have a sustainable food source, such as more tropical areas.

As for hummingbirds specifically, all hummingbirds that are native to Michigan will migrate during the colder months of the year. Most hummingbirds will migrate, with the exception of one species that is native to the Pacific Coast. This means that if you want to save space in your backyard, you will want to have a good sense of when this migration will occur.

Why Do Some Hummingbirds Migrate and Others Don’t?

Hummingbirds migrate primarily to follow their food sources of nectar, insects, and similar foods. As the United States grows colder when winter sets in, flowers will begin to wither away and insects will die out, leaving the hummingbird with no reliable food source, even if you keep a feeder in your backyard. One feeder alone cannot sustain a single hummingbird throughout winter, let alone several hummingbirds that are unable to make their migration due to other reasons.

As such, hummingbirds will begin their migration as soon as the food sources begin to diminish, which depends on the part of the country where they are located. Most hummingbirds will fly southward at a pace of approximately 20 miles each day, which is a considerable distance given their small size. The migration process is a daunting and lengthy task for the small hummingbird, but making sure that it has a stable food source is well worth the cross-country trip.

What Would Stop a Hummingbird From Migrating?

There are two major reasons why hummingbirds may decide not to migrate for the winter and make the trip back as the tropics warm up again. The first reason is because of health. 20 miles a day is a strenuous pace for hummingbirds to keep up, and if a hummingbird is particularly sick, weak, or otherwise unable to make the flight, it may stay behind.

Located all across the Pacific Coast, these hummingbirds stay in place throughout the year. Rather than migrating closer to the equator and back again, they prefer to stay in relatively the same location, only changing elevations as needed when the seasons shift. During the summer, they will move to higher elevations, and in the winter, they will move to lower elevations.

How Do Hummingbirds Benefit From Migration?

Now that you understand a little bit more about hummingbirds and their migration process, you may want to know more about how it benefits the hummingbirds. After all, what reasons are there to take such a long and arduous journey across the country, and sometimes even across several countries?

Generally speaking, hummingbirds choose to migrate almost exclusively for their food source. When winter sets in and plants begin to die and insects stop going outside, a hummingbird is not going to have a source of food to rely on. With their notoriously fast metabolism, this can lead to the beginning of starvation within a few hours, leaving migration the only feasible way to stay alive during these times.

When migrating back, it is for a different, almost completely opposite reason. When the hummingbirds are coming back to the United States during the beginning of spring, it is because animals in the tropical regions are waking up from their winter slumber and even more vegetation is blooming as temperatures rise. For hummingbirds, this means that there is going to be drastically increased competition, driving the hummingbird back to the state where it stays the majority of the year.

How Long Do Hummingbirds Typically Stay in Michigan?

When it comes to Michigan and knowing when do hummingbirds leave Michigan, the answer lies within the temperature changes. In this state, where winters tend to start earlier than most of the country due to how northward the state is and its proximity to the Great Lakes, hummingbirds begin their migration comparatively early.

During the approach of winter, most hummingbirds will begin to leave in the middle of October. Ideally, you should keep up your hummingbird feeder for two weeks after the last sighting of a hummingbird so that you can offer food to hummingbirds that are migrating from Canada and other places within the state. For most people, this ends up being around mid-November.

As for when hummingbirds come back, you can generally expect them to appear when flowers start growing again and the possibility of snowfall is minimal. Different hummingbird species will have different migrating times, but most people can expect the hummingbirds to return back to their rightful state in the late weeks of April, with outcasts of the group arriving in early April, which is when you should start putting out the feeders again.

No matter if you are someone who appreciates bird watching but wants to save space in their back garden or you simply don’t want to get your hopes up about seeing a hummingbird when they have already made their way across the country, it is important for anyone with a hummingbird feeder to have a good sense of when the hummingbirds will begin migration and when they will return back to your back garden.

Most hummingbirds will arrive in the state within the month of April and will migrate south during the late portion of October and the early portions of November. 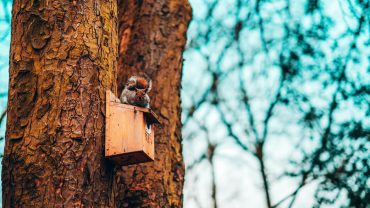