It’s a simple fact. People love cartoons, and people love dogs. So putting together a show about a cartoon dog sounds like a recipe for success. Scooby-Doo is a famous cartoon that has withstood the test of time to become one of the most beloved cartoon characters of children and adults worldwide.

Although he got his start in animation, Scooby-Doo has become a popular icon that spawned a franchise of live-action films from 1969 to the present. The most recent of these releases is Scoob!, a computer-animated comedy-mystery film, starring a younger Scooby-Doo and the Mystery Inc. gang. They team up with other notable Hanna-Barbera characters to stop a dastardly villain from taking over the world yet again.

In this article, we’ll take a look at the history of our favorite Saturday morning cartoon dog and finally put to bed that age-old question: what kind of dog is Scooby-Doo, anyway?

The idea of a cartoon dog and his friends going to haunted houses, fighting monsters, and solving spooky mysteries is what Hanna-Barbera initially pitched to CBS. It was intended as a scary cartoon, complete with villains and ghosts, but lacking in the cute, tongue-in-cheek, signature style of humor that Scooby-Doo is known for.

CBS loved the idea but worried that the parents wouldn’t be open to letting their children watch something that might give them nightmares instead of laughs. Instead, they agreed to keep the scary motif but add in some humor. They also decided to call the dog “Scooby-Doo,” with his adorable signature catchphrase, “Scooby-Dooby-Doo!” The rest is history.

Scooby-Doo also has the distinct honor of being one of the longest-running cartoons on television.

Although the show has evolved over time, it has kept its core cast of ascot-wearing leader Fred, feminine and insightful Daphne, brainy and quick-thinking Velma, and the ever-hungry Shaggy to accompany the fraidy-cat Scooby “Scoobert” Doo as they drive around in their Mystery Machine, chasing ghosts, solving mysteries, and unmasking bad guys.

There have been over 300 animated episodes of the Scooby-Doo series since its inception in 1969, including spin-off shows like A Pup Named Scooby-Doo and Shaggy & Scooby-Doo Get a Clue!

There have been several live-action films, including the famous Scooby Doo: The Movie, using a CGI Scooby Doo model to solve mysteries alongside its cast of human characters, including real-life married couple Freddie Prince Jr. and Sarah Michelle Gellar as Fred and Daphne, respectively.

The show has existed for so long thanks to the fun and adventure as the gang tries to get to the bottom of things. This has led to an enduring love of Scooby-Doo that has lasted generations. Although people can usually sing the “Scooby-Doo, Where Are You?” theme song by heart, many people aren’t quite sure what kind of dog Scooby-Doo is.

So if you were to go to the pound looking to adopt a Scooby-Doo puppy of your very own, what kind of dog should you get? That answer might not be as clear as you might have been expecting!

If you look at Scooby Doo’s skinny legs and stocking torso, you can probably come to the conclusion that Scooby-Doo is a Great Dane, as most dog-lovers already suspected.

Although Great Danes are big, powerful dogs, they tend to have half the lifespan of their smaller canine counterparts. While some Great Danes can live between 8 to 10 years, some only live 6 or 7 years. There are a lucky few who reach the ripe old age of 12.

Either way, it’s fortunate that our favorite Scooby-Doo is just that, a cartoon. Otherwise, he would be over 50 years old today, and that’s not even counting in dog years!

Great Danes are also a unique breed of dog. Unlike Dalmatians, who are known for their signature white fur and black spots, this classic breed can come in various colors and patterns.

Although they are most known for their golden fawn with a black mask, they also appear in brindle – featuring black stripes on honey yellow fur.

Great Danes also come in a straight glossy black and a cool steel blue-gray color. Finally, there’s a harlequin variety consisting of a white base color with black patches covering most of the fur, and mantle: a solid black coat that covers the body and head, with most of the face, neck, chest, and forelegs being white.

Unfortunately, this pattern doesn’t fit the cartoon dog Scooby-Doo, who, despite minor changes in his appearance over the seasons, has maintained a brown fur coat with signature black patches, including a prominent one on his back.

His jawline is also elongated and stands in stark contrast to the shorter, muzzled snout that Great Danes usually sport.

Great Danes are also known for their muscular, strong bodies. Scooby-Doo’s legs are bowed, sloped awkwardly, and his overly-large feet make him clumsy and likely to stumble, especially when he’s running away from all of those ghosts and ghouls!

While this often leads to comedic effects in the show, it also doesn’t lend itself to the physical description of a Great Dane, known for its good posture, muscular physique, and agility.

Long Answer: He’s Actually the Opposite of a Great Dane

The creator of Scooby-Doo, Iwao Takamoto, completed an interview with the Sydney Morning Herald in 1997, where he admitted that he took his inspiration from a breeder of show dogs. He wrote down all of the best features a Great Dane had to offer, but not in the way you would expect. He admitted that he learned “what made a prize-winning Great Dane and went in the opposite direction.”

Since Scooby-Doo is the opposite of an ideal Great Dane specimen, can we still call our loveable klutzy pooch a Great Dane? The answer, as it turns out, might be in his disposition.

One of the iconic highlights of each episode of the show is when Scooby-Doo is asked to go into a situation, like a haunted house, that he finds too scary for him. Instead, he digs his heels in and insists he’ll wait outside.

This training method of awarding dogs with treats is used to comedic effect when a member of Mystery Inc. offers him a Scooby Snack. Occasionally they have to bribe him with one or two Scooby Snacks if the mission seems especially perilous, but Scooby-Doo always seems to pluck up and find his courage after downing one of his appropriately-named treats!

Great Danes also do well with frequent socialization and human contact. Scooby-Doo is rarely seen on missions by himself. When the team is riding around in the Mystery Machine, we often see his best friend, Shaggy, rides back there with him.

Although Fred frequently suggests that the team “split up,” Scooby-Doo never goes it alone either. He’s always accompanied by Shaggy, although sometimes with Velma and Daphne, in case any of his friends find themselves in need of support.

Even in the 2002 live-action film, Scooby-Doo: The Movie, the plot revolves around the team splitting up and going their separate ways after a caper goes horribly wrong. Although each member of the group seemingly takes time to grow and evolve on their own, Shaggy and Scooby are shown to stick together, living it up in their van by the beach as they scarf down sandwich after sandwich.

Scooby-Doo is also shown to be a very social dog. He’s not afraid to approach strangers (especially if they’re holding food!) and usually enjoys human contact, such as being petted and being told he’s done a good job. Although he does tend to growl and bark at strangers on occasion, as any dog would, he usually has only done so when they have proven to be suspicious and are likely the “person in the mask.”

So What Kind of Dog is Scooby-Doo, Really?

The answer to that question is easy – he’s a cartoon dog! Mystery solved!

Although he was initially created to have the physical appearance of a clumsy Great Dane that probably wouldn’t win any award shows in today’s world, Scooby-Doo does have some of the mannerisms of a Great Dane. He responds well to consistent training, and he also does well socializing and interacting with people.

Although many people say they would love a pet Scooby-Doo of their own, people don’t need to go out looking for a klutzy Great Dane with an unusual fur pattern. Many dogs can be friendly, easily trained with consistent rewards like treats, and are just as afraid of ghosts, monsters, and haunted houses as Scooby-Doo! 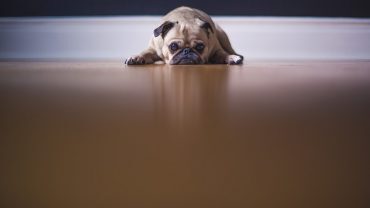