Tramadol is an opioid painkiller that is usually given to humans, and can also be administered to dogs to relieve the excessive pain that’s caused due to osteoarthritis (OA). OA is a serious problem that can affect your dog’s movement and prevent it from feeling comfortable in its own house.

Tramadol is an opioid painkiller that is sold under the brand name Ultram. It’s used for treating moderate to severe pain in both humans and dogs, and it generally impacts the body by rewiring the brain and its response to pain. In humans, Tramadol HCL can be used by simply ingesting it via the mouth.

The doctor will recommend the best way to take the medication, along with the duration. Usually, doctors recommend taking Tramadol after every four to six hours. However, you can’t just give Tramadol to your dog without going to the vet first. It is highly recommended that you take a trip to a vet to determine the best course of action.

OA is a progressive condition that is going to worsen over time. It’s caused due to damage around the cartilage that makes it difficult for the joints to move freely. The cartilage serves the cushioning, and when that is destroyed, the animal feels a great deal of pain as it moves around. The worst part is that there’s nothing you can do to treat this condition; you can only help in relieving the pain.

How Does Tramadol Work?

Tramadol works by reducing the reuptake of norepinephrine and serotonin within the brain. This leads to a euphoric feeling and reduces the amount of pain felt by the body. It’s very similar to the way morphine affects the brain. However, since this is an opioid, morphine is designated as a schedule IV controlled substance.

The potential for abuse among humans is quite high, so you have to understand that your vet might be wary and will look out for signs that the pet owner is abusing the medicine. If they feel that this is happening, they will report it to the authorities.

If your vet prescribes the use of Tramadol for your dog, you need to follow their instructions as carefully as possible. There have been many cases where dogs have overdosed on the medicine. More importantly, the sudden stoppage could also lead to serious withdrawal symptoms, so it’s recommended that you follow the guidance given by your vet to manage the condition properly.

Vets usually prescribe Tramadol because it helps treat moderate pain symptoms that usually arise in dogs. If the pain is quite severe, the vet may even add other opioids to treat the problem. While Tramadol is usually given after an invasive medical procedure or after a surgery, many older dog breeds that suffer from OA are also prescribed this medicine.

Vets also prescribe Tramadol to treat other problems that might lead to acute pain. A common example is injuries. If your dog has sustained a serious injury, Tramadol might be an effective recourse for treatment. However, it’s mostly used for treating chronic pain caused by problems such as OA and cancer.

It usually takes around a few weeks for the positive effects of the drug to show. And, like humans, there is also a tendency among dogs to develop a tolerance to the drug. That is one of the main reasons why vets also prescribe several other painkillers apart from Tramadol.

Tramadol dosage for dogs usually varies depending on the size of the animal. You must strictly adhere to the dosage prescribed by the veterinarian, as changing that could have an adverse effect on the animal. It is important that you do not replace the advice given by your vet or try something else.

Usually, the ideal dosage given for Tramadol is between 0.45 and 1.8 mg for each pound of body weight of the animal. It’s given after intervals of eight to twelve hours. However, if the condition is severe, such as treating cancer, the dosage might be administered every six hours.

Tramadol is generally available in 50 mg tablets, so it can be a bit complicated to figure out how much you should give. More importantly, you should never crush these tablets. It’s best to visit your vet, as they will tell you how to measure the appropriate dosage for Tramadol.

It’s also important to note that water should be given in large quantities to your dog along with the medicine. It could cause dehydration and your dog is likely to be frothing at the mouth. You can also mix the tablets in the dog’s food or give them without it. Overdosing can be fatal for this medicine, so it’s important that you follow the advice given by your vet.

There are some major symptoms that indicate a potential overdose. For instance, if your dog’s breathing shallows out or the dog becomes incredibly lethargic, you may want to rush to the vet. Fainting or coma are also serious signs, so it’s best to rush to an emergency vet. If the dog is given more than necessary, its stomach might have to be pumped out as well.

Also, as mentioned, suddenly discontinuing the medicine is a serious problem. Your dog may start suffering from breathing issues, nausea, diarrhea, or even tremors. The withdrawal symptoms are serious enough that your dog is going to find itself in lots of pain. You will notice the animal becoming incredibly agitated.

There are a few side effects that you need to be wary of. The dog is likely to start suffering from an upset stomach when you begin the treatment, or it may even experience diarrhea. Dizziness and seizures, though rare, cannot be ruled out. If you see any of these side effects appearing in your dog, you should take your dog to a vet.

They will recommend the best option and dosage for your dog that works well. 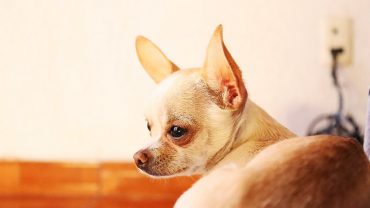