The tabby cat is a domestic cat that has a unique M on its forehead. The tabby cat has stripes running through its face and its cheeks, and you will also notice these stripes along its back and its legs too. This tabby pattern is quite popular and is seen in cats all over the globe. The tabby cat has evolved from the African wildcat, though it also shares ancestry with the European wildcat and the Asiatic wildcat.

If you are looking for suitable tabby cat names, you need to first take a look at the cat. The name of the cat usually relates to its appearance or you might want an affectionate word that just rolls off the tongue. However, many people are quite meticulous about naming their pet; going with long names too.

One thing that you should know is that the tabby cat isn’t exactly a breed; it’s actually a name for the markings that are found on its fur. There’s no shortage of names that you can choose for your cat. But first, you might want to take a look at the breed. Common examples of tabby cat breeds include:

Also, if you are looking for different tabby cat names, some of the most common ones include:

As you can see, there’s no shortage of names. You can pick whatever name you like for your cat. The important thing is to make sure that you train the cat to understand its name as well.

Tabby cats are generally laid-back cats and don’t like to prance around all that much. However, these cats are quite active when they are kittens, and as they age, you will notice their activity levels dropping with time too. It’s also important to note that the tabby cat loves its owners very much.

Tabby cats like to sleep around for most of the day, and you won’t find it getting in your way. But, these cats are incredibly curious, and like to move around whenever they can get some space. If you have a male tabby cat, you might want to give it a bit of space. Male tabby cats like roaming around at night as well, so letting them loose (with a collar) isn’t uncommon.

These cats like to cuddle from time to time as well, especially when they are feeling affectionate toward their owners. So, you might notice the cat jumping up on your bed or when you are on your couch and just nuzzling with you for a bit. It’s a pretty common behavior among tabby cats.

If you have decided to bring a kitten home, there are a few changes that you will have to make. First of all, make sure that the kitten has been weaned off of its mother’s milk so that it is capable of eating other things. Second, you will want to make sure that you slowly introduce the tabby cat to its new surroundings.

The best way to begin is by originally keeping the kitten in one room, and letting it find its footing. The cat will slowly begin to explore its surroundings on its own, and you will notice the animal getting more and more inquisitive. With the passage of time, you can start introducing the tabby cat to other parts of your house.

It is also incredibly important for you to litter train the cat from an early age. Ideally, you just need to keep a lookout for signs that the cat has to go. Cats have a natural tendency to dig the ground underneath when they want to defecate or urinate, so if the cat is on the litter, it won’t take long for the cat to understand.

Caring for the Tabby

These cats don’t really have any special requirements, but you will want to make sure that you spend as much time as possible with the animal in its early stages so that the animal gets accustomed to you. Once that happens, you will notice the cat running around you and playing with you whenever it is in the mood.

Furthermore, you should know that these cats grow very quickly, so it won’t take long for the little kitten to mature into a majestic cat. With the passage of time, the cat will stop spending as much time with you and will start exploring its surroundings. Tabby cats, like most others, tend to sleep for 15 or 16 hours a day. Some can even sleep for 20 hours a day!

Just make sure that you create a comfortable surrounding for the animal and provide it with plenty of toys and exercise. You might want to consider investing in some good quality wall shelves and perches where the cat can relax. That’s all you are going to need to properly care for the animal!

A Fun Cat to Be with

Tabby cats usually share the traits of their actual breeds, so it primarily depends on the kind of breed you have chosen. It’s recommended that you do your research about different cat breeds and then decide on one that will best suit your nature as well before you buy one.

These are just a few things that you should know about getting tabby cats, caring for them and naming them! 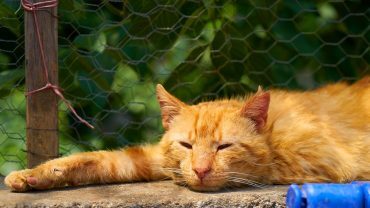