You’ve been thinking about getting a dog, and you’ve decided you want a Golden retriever. Now which kind of Golden is right for you? There are some subtle and not-so-subtle differences among these wonderful dogs that you may want to consider before making your final choice. Below we will highlight why a Red Golden retriever should be a great choice and some things to keep in mind during the comparison. Let’s begin.

How Was the Red Golden Retriever Bred?

You would be forgiven for not knowing what a Red Golden retriever is. The history of this particular type of Golden is an interesting tale, starting back in the 1800s. To begin with, we need to know some of the regular Golden retriever’s history. The Golden retriever was bred for sport, and specifically for hunting. Originally founded in 19th century Scotland, hunting was one of the most popular sports of that time.

Wanting to breed a better hunting dog, Scottish Lord Dudley Marjoribanks set out on a mission to create the perfect hunting companion dog. Majoribanks experimented with several breeds as he sought the perfect result. Eventually, the Golden retriever was born. Named for their ability to fetch or retrieve shot prey during the hunt, Golden retrievers excel in fetching, running, fishing, and scent-tracking. Golden retrievers also have their exquisite double-coat of fur, which, along with being rich and beautiful, also serves to protect them from the elements.

Although Goldens today are considered show dogs, they were created to be a working field breed. Today there are two separate kinds of Golden retrievers: show or conformation retrievers and working or field retrievers. Along the lines of the traditional retriever, the Red Golden retriever was produced by breeding a Saint John’s with a Red Irish setter. Some dispute this story, though, claiming that a Field retriever was mated with a Water spaniel.

There are additional theories, and very few records exist that can conclusively show the history of the Red Golden. While we may never be sure of the exact history, one thing is certain – the Red Golden retriever is both visually stunning and a loyal companion.

Their Coat Is G.O.A.T. (Greatest of All Time)

The most visually striking feature of the Red Golden retriever is their coat. Touting a rich dark golden color that gives them their name, the Red Golden’s coat is a thing of beauty. Even so, the Red Golden is still a working dog, and not recognized as a show breed by either the American or UK Kennel Club. Due to this, Red Golden’s are not permitted in dog shows, although their coat is truly beautiful.

Another benefit of their coat is that the fur tends to be on the shorter side. This makes it more manageable with less shedding and less overall maintenance. Because Red Goldens have less fur, this also means identifying injuries can be easier. A Red retriever’s fur may be shorter, but that does not mean that their coat is any less impressive. Their vibrant color, which ranges between amber and sandstone with slight indigo highlights, is stunning to behold. When you see one for the first time, it’s difficult not to be impressed.

The Red Golden’s Temperament Is Golden, Too

Along with their comely coat, the Red Golden retriever is equally beautiful inside. Generally recognized as one of the nicest breeds of dog, Red Golden’s make terrific family pets and adapt to home life well.

Being a member of the Golden retriever breed, the Red Golden shares other traits with them as well. All retrievers are typically on the energetic side. They like to play, run, and of course, fetch. Due to their easy-going and pleasant disposition, though, the one thing they do poorly is guard. Red retrievers are not considered to be guard dogs. They are more likely to play with an intruder than defend the home, so keep that in mind.

Red Goldens share other aspects such as height, weight, health, and total lifespan with their namesake, the classic Golden retriever. This commonality can give you a sense of security: you know what you’re getting. If you’ve dealt with a Golden retriever before, you can expect more of the same with a Red Golden, save the differences mentioned above. This also means that most of the information that you learn about regular Golden retrievers can more or less be applied to Red Goldens as well. Again, this is a good thing.

For example, a Golden retriever’s adult weight is usually around 70 pounds, which is the same as a Red Golden’s adult weight. This trend remains consistent for a retriever’s expected lifespan, which is an average of 11 years. On that note, you may want to consider that Golden retrievers tend to develop cancer. To maintain your dog’s health and wellness, annual veterinary visits to conduct cancer screenings and other health checks are especially important.

Are You a Believer in the Red Retriever?

A Red retriever is a great addition to nearly any family home. With its chill attitude, a Red Golden typically plays well with children and is not bothered with an active lifestyle. In fact, a Golden retriever will thrive with a lot of activity, as their energy level is higher than other dogs.

Of course, each dog is unique, even within the same breed. The best way to determine if a Red Golden is right for you is to meet the dog for yourself. If you have children, let them interact with the prospective pooch and see how things go. It won’t take very long to see if there’s pet chemistry.

A Red Golden, like all Goldens, is usually quick to assimilate and warm-up to friends and family, and rarely has problems with new guests. Again, this is why they aren’t the best as guard dogs, but this is also what makes them outstanding family dogs. So the trade-off is acceptable for that purpose.

If you have a child who has always dreamed of playing fetch, a Red Golden will be a perfect buddy for them. You won’t need to worry about the Golden being agitated by the never-ending energy of a child – a Red Golden will usually be able to keep up. And this is one thing that needs to be considered a bit more seriously.

A Golden Retriever Can Get Cabin Fever

As we’ve mentioned, Golden retrievers of any type are high energy dogs that enjoy an active lifestyle and a lot of movement. Is this a good fit for you and your family? Only you can answer that question. A Red Golden, especially a puppy, will be extremely active and want to go-go-go most of the time. They will want to run in the backyard or the park and engage in active play.

If this sounds like a good fit for you and your family, then you will love welcoming a Red Golden into your fold. However, if your family moves at a slower pace and prefers more sedentary forms of entertainment and play, a Red Golden might be less fitting. This advice is not to say that a Golden can’t enjoy a lazy day indoors once in a while; they most certainly can. Golden retrievers are very intelligent and can adapt to all kinds of lifestyles. Their adaptation will be a process in which they learn to retrain their natural-bred instincts as outdoor field dogs.

As with most things, whether a Red Golden retriever is right for you comes down to personal preference and lifestyle. The beautiful Red Golden definitely has a lot to offer and is guaranteed to enrich your life in a profound way. If you want a loyal, intelligent companion who enjoys having fun and staying active, then a Red Golden is an obvious choice. 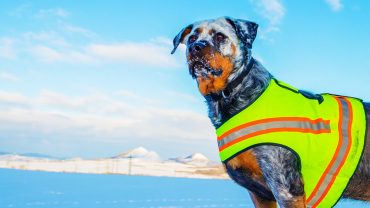