There are many reasons why people choose to adopt dogs. Some people are looking for friendly companions at home after a long day of work. There are dogs that can bring a beam of light into their owners’ lives with the amount of energy they bring. There are also dogs who enjoy lying on the couch and simply resting in your lap for the entirety of the day.

On the other hand, there are also a number of dogs that are considered to be “working” dogs. These are dogs that often perform jobs of their own. Their “job” could be herding livestock, guarding houses, or doing diligent work as a police dog or therapy dog. Chances are there will be some type of dog that suits your needs. For example, if you are looking for a strong guard dog, you might want to consider the presa canario.

The presa canario, sometimes called the perro de presa canario, translates from Spanish to the Canary mastiff. Not only does this tell you where in the world the Canary mastiff originated, but it also gives you an idea of where it came from in terms of history, with its name pertaining to the Canary Islands, rather than the bird. These large, imposing dogs are fairly rare, meaning that if you choose to adopt one either as a family dog or a guard dog, you can rest assured knowing that you will have a dog that stands out from the crowd.

Where Did the Presa Canario Come From?

Back then, large dogs were commonly used to guard farmland, help work the cattle, and even drive away stray and wild dogs to keep everyone safe. After all, centuries ago, people didn’t have the security measures that people do in today’s time. Back then, the best security measure was a large, fierce dog that wasn’t afraid of defending its territory from other dogs, and sometimes even other people.

As time went on, the large dogs that guarded portions of the Canary islands began to develop into their own distinct breeds, with the Canary mastiff being known for its intelligence and physical prowess, as well as its seemingly innate guardian personality. Because of its physical strength, this dog was also a common fighting dog.

However, as the populace looked down on dogfighting and banned it, people began to turn to other, newer dog breeds that were better at fighting than the Canary mastiff was, and its numbers began to drop sharply.

During the 1970s, it is believed that enthusiastic dog breeders began breeding the Canary mastiff again, as it is a natural-born guard dog. From here, efforts were made to restore the number of Canary mastiffs on the island. This dog still stands as an important figure in a number of places, although unfortunately it is also banned from many countries as well due to its potential to be a relatively aggressive dog at times. With that being said, with the right care, this dog can become a loveable home or farmland guardian.

From appearance alone, you can tell that these dogs have a history in both fighting and guarding land. They have a strong and imposing appearance, standing between 22 and 26 inches tall. Their hefty, rectangular bodies can weigh anywhere from 84 to 110 pounds, if not even more than that. These dogs also have a solid, muscular build which only adds to their appearance. They generally have a rectangular, well-proportioned body with thick legs, a stocky tail, and a square head. Their ears droop downwards, as do their eyes. They have a large snout that is typically covered in black markings.

The coat of the presa canario, which is short and rough, can come in a variety of colors. However, it is commonly between a black and brown shade. It can be solid, bi-color, or mottled in appearance. There are rarely more than two colors on the dog’s coat. Canary mastiffs almost always have black markings around their snout, under their nose, and around their mouth.

How Does the Presa Canario Behave?

These dogs are self-confident, though affectionate dogs. As natural guardians, they are wary of anyone who is not considered family, which can pose some trouble if you have people over to your house on a frequent basis. They do not appreciate strangers until they see that you, as their owner, trust the stranger.

They are usually alert, especially if they sense that there is something on their territory, which is usually your property or your farmland. They are not suitable for people who are not used to dealing with confident, self-assured dogs. What this means is that this dog will try to assert itself as the alpha dog of the group, and in order to keep it well-behaved, you need to make sure that you assert to the dog that you, as the owner, are the alpha of the family. This is not something that first-time dog owners can do well.

These dogs do have the potential to become aggressive, and in order to minimize that, you will need to begin socialization at a very young age. You also need to make sure that the dog goes through and understands obedience training if you want to make sure that it heeds your commands.

As long as you do this, there will be minimal chances of it showing aggression unprovoked. When the Canary mastiff knows that you, your family, and their territory is safe, they can be affectionate and loving, making them a good member of your family. Do keep in mind that it is important to watch any children who go near this dog, as it is already wary of strangers in the first place, and a young, curious child might not know how to interact with dogs safely.

What Kind of Care Does the Presa Canario Need?

These dogs, being docile by nature, do not need a lot of time outside. As long as you give your dog regular exercise as you would with any other dog, it will be satisfied. This should include some time running around a well-fenced yard or several short walks throughout the day. Its coat is also very easy to maintain, as short and rough coats are the easiest to clean and require minimal grooming. You are usually safe brushing their coat weekly, or sometimes even bi-weekly. These dogs should only need a bath every few months, unless they get themselves into trouble outside.

What Kind of Health Does the Presa Canario Have?

These dogs, being large dogs, do have the potential to have skeletal issues as they grow up and get older. With their drooping ears and eyes, they also have the potential to pick up infections more easily, so you will need to watch for the signs and symptoms of that. They are also prone to heart disease, hypothyroidism, and bloat. These dogs have a surprisingly long lifespan for a dog of their size—8 to 11 years. 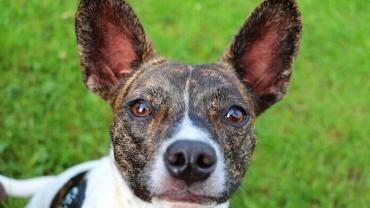