For years on end, German shepherd dogs (GSD) have earned high-ranking positions on the popularity scale. If you are looking for a “diverse” canine companion, German shepherds are the perfect fit. They make great family companions and fierce protectors. Their intelligence and loyalty traits are so exceptional that many have earned themselves careers as assistance dogs in the military and police force, and providing help to people with disabilities.

A typical male GSD has a medium to large body size, getting as tall as 65, and weighing from 32 to 40 kg. You can’t fail to identify German shepherds from a pack of dogs. Their standard black and tan coats, and their distinct black snouts give them away quickly.

However, there are other uncommon coat color varieties such as pure black, pure whites, and panda shepherds.

The GSD ancestors were initially bred by shepherds to assist them in protecting the flock. Their robust body builds, and alertness made them great shepherds, hence the name. Their uncanny resemblance to wolves is often highlighted by their robust facial features and sturdy legs. Their wariness of strangers can make them quite unfriendly, further emphasizing their similarities to wolves. However, early socialization should take care of this trait.

All You Need to Know About German Shepherd Ears

Typically, German shepherd ears are known to “stand up,” creating the illusion of alertness and readiness for action. But since your canine friend can’t verbally articulate themselves, you should pay attention to their body language.

In this article, we’ll discuss what to expect in the different development stages of your GSD and what each ear pose signifies. It is vital to pay attention to your dog’s body language to avoid any stressful situations.

As the name suggests, you will notice that your GSD’s ears are relaxed and flopped facing backward. This pose shows that your furry friend is at ease.

If you have ever seen your dog feeling fearful or anxious, you’ve probably noticed how their ears always point backward. In such a case, you should try to calm them down. You should be especially alert if you have guests over because your dog might be agitated.

If you notice your dog’s ears pointing to the front, it means that they are attentive. It is also a sign that they are feeling confident in the immediate environment.

German shepherds don’t need to turn their heads to pay attention. By merely turning their ears in different directions, they can hear multiple things happening at once.

While multitasking is generally challenging for humans, GSDs can focus their attention on several sounds simultaneously. Such situations often arise when they are outdoors around moving vehicles, other animals, and humans.

When Do German Shepherd Ears Stand Up?

If you’ve just adopted your puppy, you’ll notice their floppy ears. This ear shape should extend well until the teething stage is over (5 months old), although it may take longer for others. After that, you can expect their ears to start sticking up.

However, if you’re a new fur parent, it is essential to note that your pup’s ears won’t always point up.

You might be wondering, “When do German shepherd ears stand up?” Well, the answer is not necessarily definitive. For instance, the teething stage lasts between weeks 16 and 20. That gap, in itself, creates some disparity.

Then there’s the occasional ear-pointing that happens when your pup is excited, barks, or hears an unexpected noise. If you see any of these signs, rest assured that your pup’s ears will grow just fine.

Why does it take so long for GSD ears to develop?

Like with human babies, it also takes time for your puppy’s body features to develop fully. At the tender age of infancy, their cartilage is still not strong enough to hold up the weight of their ears. Their bodies use up the calcium to grow bones rather than cartilage, explaining the importance of a nutritious puppy diet.

Don’t be surprised to find puppies from the same litter growing at different rates. Some puppies might take five months to develop their ears, while others may take up to seven months. The stakes are even more complicated if your litter is mix bred.

However, by the end of the eighth month, under-developed ears will remain the same as this is the permanency stage of ear development.

As your puppy grows and consumes foods rich in calcium, their ear cartilage will start to build up. However, keep in mind that if your puppy’s ears are not standing by the end of the seventh-month mark, they’ll probably never do so.

Nonetheless, how can you help their ears fully develop naturally? Let’s discuss a few pointers on how to assist your beloved pet.

On the other hand, if you’re wondering can you train your puppy’s ears to not stick out, we’ve got you covered. Simply use dog ear tape. Contrary to people’s assumption that taping your dog’s ears is cruel or inhumane, you’re actually doing your pup a great service. Besides, it is also painless for them.

Typically, their ears should lay flat and frame their faces rather than twist in different directions. Taping your puppy’s ears will ensure that they grow normally. This is especially vital if you want your GSD to have a show career. It’s best to attempt this process when your puppy is full and freshly bathed.

If you realize that your German shepherd has joined the floppy ears group, don’t worry; they’ll be in great company. There are numerous popular breeds that “wear” their floppy ears with pride.

When running at high speeds, their floppy ears resemble wings, as they dance in the wind. Studies have also shown that long ears help dogs to better track scents of prey and hidden explosives at security checks.

How does this work? The long ears heighten a dog’s sense of smell by funneling odors closer to their nose. If you’ve ever done some research on hunting dogs, you’ll notice that most of them have floppy ears. Their impressive ears help them track prey over long distances. Makes sense now, right? Below are some examples of dog breeds with floppy ears.

Although they are very playful and friendly, don’t be fooled by their cute face and small features. They can sniff out well-hidden explosives. Long before they earned careers as service dogs, they were used by hunters to hunt, flush, and retrieve birds from bushes.

What’s more adorable than the Poodle? Their thick, curly fur combined with small frames further highlights their cuteness. Poodles are surprisingly smart and athletic, making the perfect combination of beauty, brawn, and brains. They excel at sports and make superb water retrievers, giving Golden retrievers and Labradors a run for their money.

The Bloodhounds’ ancestors were originally bred for hunting wild boar and deer in the Middle Ages. They can track a scent as far as 200 km. However, despite their large frames and terrifying name, these dogs are very patient, gentle, and calm, making them an excellent family addition.

Their long floppy ears and short legs are their trademark feature. Despite their small frames, their sense of smell and tracking skills are only second to Bloodhounds. They can track scents over a long distance, and were initially used for hunting the evasive hares. When not on hunting sprees, they’re loving, laid-back canines.

Daschund’s history dates back to 600 years ago when they were bred to hunt tunneling animals such as rabbits, badgers, and foxes. Also known as sausage dogs, Daschunds are tiny dogs but with enormous personalities. They are known for their stubbornness and courage to defend themselves against larger breeds. Their loving and protective nature makes them great family additions.

Did you know that Beagle means “loudmouth” in French? Beagles are known to always express their feelings by exercising their vocal cords. However, their sharp noses compensate for this trait. They can tirelessly track scents and prey for miles.

Although dogs are not all similar, it is also essential to pay attention to your pup’s development. If you realize that your German shepherd’s floppy ears are still persistent at the end of their fifth month, you should immediately consult your vet. Failure to do so might result in an irreversible deformity.

However, following the guidelines provided above will help ease your mind, allowing you time to enjoy bonding with your German shepherd puppy. 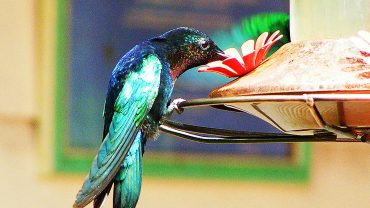