Just about everyone has heard the old adage that a dog’s human equivalent age is the same as each year counting for seven years, and while this may be true in an extremely loose and general sense, the age of your dog is not something that can be exactly correlated into human years, especially when you factor in the differences between breeds.

For instance, if you consider a two-year-old dog to be about 14 in human years, this isn’t entirely accurate. By the age of two, dogs are considered to be fully grown adults and start the period of their lives where they lose their puppy energy and settle into a more mature behavior pattern. Arguably, humans take another seven years to reach that point, if not more.

If you are curious about what to expect from your dog as it ages, the first thing you should do is remember that there are a lot of breed-specific differences that cannot be applied to humans quite as easily as some people would like to believe. Knowing how your dog is going to age requires you to have a good sense of your specific breed of dog.

A good rule of thumb to consider is that the more “extreme” your dog is in terms of sizing, the shorter its life is going to be. This is exaggerated more in dogs that are larger, but dogs that are bred to be exceedingly small tend to experience health issues that will impact their overall lifespan as well. This is part of the reason why you cannot apply a flat conversion of each year of your dog’s life equating to exactly seven years of human life.

Another thing that you need to consider is that, on average, purebred dogs are not going to live as long as mixed breed dogs. Even if you choose to adopt from a highly reputable breeder who works hard to focus on a breed’s health over meeting show standards, there is always the greatly increased risk of hereditary conditions that can be passed down, shortening the dog’s lifespan.

If you want to make sure that your dog lives as long as possible, you will want to consider getting a mutt or a mixed breed. These dogs have a tendency to live longer because they don’t have the history of inbreeding and carrying hereditary conditions the way that purebred dogs do. If you are set on adopting a purebred dog, make sure to do thorough research and choose a breeder who prioritizes the health of the dog over show quality. Never adopt from a breeder who isn’t willing to discuss the health and genetics of their litters.

On average, dogs that are bred heavily to be show quality are going to have the most risk of carrying hereditary illnesses. This may not always affect your dog and there is the chance that you may be lucky and the dog won’t develop an illness, but the chance is there and it is significant enough not to be ignored. The more a dog has to be inbred to carry recessive appearance traits, the higher the chances are that its lifespan will be shortened.

If you still want to try and guess your dog’s age in terms of human equivalent years, there are other ways to adjust the dog year to reflect on that. There is a fair amount of science that goes into how dogs mature and develop compared to the rate that humans do, and the general consensus is that it is not necessarily a linear scale of each year equating to a flat seven years in human time.

For giant breeds (and in the later years of large breeds) this scale is a little bit different. From the age of about four years, each year of your dog’s life is equivalent to closer to 7 to 8 (so a dog’s equivalent age from five to six would be from 36 to 45, rather than 36 to 40), as most large dogs do not live quite as long as smaller breeds do. For large breeds, this discrepancy happens closer to about nine years of age, as this is considered more senior years for your dog’s life.

How Can You Tell That Your Dog is Growing Old?

Because different sizes of dog will age at a different rate, you cannot use years alone to assume how close to senior life your dog is at. Instead, you will want to rely on the classic signs of aging to assume whether or not your dog is beginning to reach the end of its line. Most signs of aging are the same across all breeds, so the breed of your dog isn’t something to factor in.

Many of the signs you will see are quite similar to human aging, starting with the graying fur around your dog’s face and snout. It may develop cloudier eyes or full cataracts, and it may seem to have trouble hearing. It will have a higher chance of developing joint issues and trouble moving, especially prevalent in larger breeds, and it will stop being as active as it used to be.

Signs that your dog is reaching an especially old age include becoming more irritable or aggressive (though this may be due to developing sicknesses or joint pain), incontinence and accidents around the house, seemingly being more confused, and having trouble maintaining basic health. 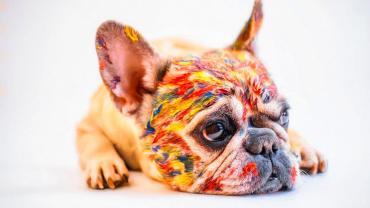