Many dogs like to eat vegetables and fruits. There is a disturbing trend going on around the world where dog owners try to feed their animals a strict diet consisting only of fruits and vegetables. That’s a terrible thing to do because dogs are omnivorous creatures, and they simply cannot get the nutrients that they need by eating only fruits and vegetables.

But can dogs eat asparagus? In short, yes. However, you have to understand that while fruits and vegetables make for a great snack, you can’t consistently feed them this only. The digestive system of a dog is quite different from humans, so foods that might be healthy for humans may actually harm your dog.

A Brief Introduction to Asparagus

Asparagus is incredibly tasty and provides a host of vitamins and minerals. It is also quite healthy and can help you lose weight and keep your metabolic system running smoothly. Asparagus contains large quantities of fiber, which is something that every dog needs. However, you have to understand that there are two popular types of fiber: insoluble and soluble fiber. The former helps improve bowel movements.

It also improves digestion and can increase the rate at which new cells develop in the dog’s intestines. Soluble fiber, on the other hand, helps in increasing the dog’s immunity by bolstering its immune system, and also leads to an improvement in overall digestion. It also leads to the generation of healthy bacteria in the colon. Soluble fiber is mostly used as a prebiotic.

The asparagus plant contains a plethora of minerals such as potassium and calcium. It also includes lots of iron as well. Potassium is an electrolyte that improves muscle health and enhances brain function, whereas calcium is good for the bones and prevents cartilage destruction as well. Calcium helps in reducing the chance of blood clots in the dog’s body as well.

Other Nutrients in Asparagus

Iron is a major nutrient found in asparagus. Iron bolsters the oxygen supply and plays an important role in managing the dog’s hemoglobin, which helps provide oxygen in the lungs and to the other organs of the body. Apart from this, asparagus also contains copper, which helps in boosting collagen and also enhances bone growth. Phosphorus is another important nutrient found in the vegetable.

Apart from this, asparagus also contains a host of vitamins, including K, E, B6, A, B9, and C. The latter is perhaps the most important vitamin needed by most living creatures. While dogs and other animals produce Vitamin C themselves, the additional amount enhances the overall level of antioxidants in the dog’s system.

This improves the immune system and greatly bolsters it against its fight against free radicals. Vitamin A is also necessary because it helps improve the dog’s reproductive system, its skin, eyes, and bones. Vitamin B9 greatly helps in increasing the growth of new cells in the dog’s body, while improving its metabolism.

Vitamin E, just like C, serves as an antioxidant that helps improve the dog’s immune system. It’s also important for boosting the dog’s skin quality and its coat. Needless to say, asparagus has a bunch of different nutrients that are great for dogs. It also contains methionine and folic acid, both of which further improve the dog’s health.

In its raw form, asparagus is not a soft vegetable. It’s actually quite hard, and this means that your dog will have to put in extra effort to chew on the asparagus. This also means that the asparagus could prove to be a choking hazard for your dog; it could get stuck in the dog’s windpipe or its esophagus, causing the dog difficulty in breathing.

First of all, you should know that the major side effects caused due to fresh asparagus include vomiting and diarrhea. Flatulence is also a problem and is quite common when your dog is fed fresh asparagus. If you have an adult dog and have never fed it fresh asparagus, you might want to start small.

How to Cook Asparagus

There are plenty of different ways to cook asparagus. But, when you have to feed it to a dog, it might not be a wise idea to put in all the spices. Some people like cooking the asparagus in butter or in cooking oil. They also like to add salt and bell peppers, along with several other spices and condiments.

While they may taste great to the human tongue, you should know that dogs can’t digest all of this stuff. Adding things such as garlic and onion is even worse – it could lead to a litany of digestive problems for the dog. You need to make sure that you only cook the raw vegetable – maybe boil it a bit, and then feed it to the animal. It’s a simple way of making sure that your dog doesn’t suffer from digestive problems.

Nothing else should be given to the animal. Also, it’s important to ensure that you do not feed the dog more asparagus than necessary. Ideally, asparagus should only make up to 10% of the dog’s regular intake. Anything more, and you may have a problem on your hands. After feeding asparagus to the dog, you should wait a few hours to see whether it reacts or causes a problem or not. These are just a few things that you should know about giving asparagus to your dog. 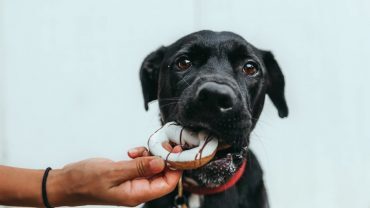