There are many, many different ways of classifying dogs. Some people classify their dogs based on their breed and whether or not their dog is a purebred creature. Other people classify their dogs based on what purpose they were bred for, such as working or for sport. With that being said, there is no category that is quite as recognizable as the sighthound family. These dogs that are long, tall, and lanky have appearances that will turn heads just about anywhere you go, and they can make some of the best companion dogs around if you have the resources to care for them.

One of the more unique sighthounds out there is the borzoi, sometimes referred to as the Russian wolfhound. These dogs resemble a classic sighthound with a few changes in physical appearance. They are tall, gentle giants and make for good companions. These dogs are adaptable to apartment life, families with children, and even families with other pets in the household, making them a great dog for novice owners to consider adopting.

What Is the History of the Borzoi?

This dog has quite the extensive history, unlike many breeds of dog out there. The borzoi, regularly referred to as the Russian wolfhound, unsurprisingly originated in Russia. This breed’s beginnings can be traced all the way back to 1650, which was when the standards for the breed were officially written. For hundreds of years afterward, this dog was bred by the nobles of Russia for hunting.

In fact, there were special hunting parties that utilized more than 100 borzoi dogs, alongside an equal number of foxhounds. The reason these hunts included so many dogs was to flush the prey (often wolves, hence the name “wolfhound”) out of its home so that it could be caught by one of the hunters behind the hunting dogs. These hunting parties ended in 1861, and with no other reason to breed borzoi, the number of them dwindled drastically until 1873.

When the breed’s admirers noticed how much the number of borzoi had fallen, the Imperial Association was created to protect and promote the best parts about this breed, immortalizing it as one of the best hunting dogs in the nation for a time. In fact, most of the borzoi that are in North America today can be traced back to dogs that were once in the kennels of the Imperial Association. Unfortunately, this foundation’s associations with nobility and aristocracy would lead to yet another downfall for the borzoi breed. After the Russian Revolution in 1918, many borzoi were killed because of the connection to nobility that this breed once had.

One of the only reasons this breed still exists today is because many had been given away as gifts to royal figures in other countries as well as enthusiasts around the world. From here, people who took an interest in the breed would make several trips to Russia specifically to import dogs so that their bloodlines could be kept going. Kennels were created and foundations were formed in other countries in an effort to preserve this unique and prolific breed, and thankfully, it appears to have been a success, as the borzoi that can be adopted today are nearly the same as the ones that caused such chaos in Russia. In 1936, the name of the breed was changed from “Russian Wolfhound” to “Borzoi.”

The borzoi’s appearance can be rather subjective, with some people calling the dog weedy, lanky, and spindly, and other people lovingly calling the dog elegant in stature. In the end, these dogs resemble most common sighthounds. They are tall, standing from 26 to 31 inches tall and weighing between 60 and 105 pounds. As with most dogs, females tend to be slightly shorter and lighter than their male counterparts.

The fur of this sighthound is silky and sometimes called luxurious. It is often a couple inches long, sometimes resulting in a matted, tangled appearance, especially if it is not groomed right. Underneath that fur, these dogs are muscular, built to be agile and swift yet strong enough to pin down their prey. Their faces, as with many sighthounds, are long and narrow.

How Does the Borzoi Behave?

Some people compare the borzoi’s personality to that of a cat’s, especially when it comes to training. These dogs often carry a regal air around them, but if they are in the mood to play, they can be goofy and entertaining for anyone who is watching. Generally, they are calm and reserved, and gentle when they are not hunting prey. Training these dogs can be troublesome, as they are just about as stubborn as cats, often taking instructions and going in the wrong direction with them. However, with time and dedication, these dogs will easily pick up tricks.

One downside to their heritage is that once these dogs begin chasing “prey,” the only things that can really stop them are either a wall or a leash. This means that if your dog is not properly introduced to smaller animals in the house, such as rabbits and cats, these animals might become the target of a chase.

Even more importantly, if you are outside and your dog decides to chase an animal into the road, the dog will not care about oncoming traffic. This means that you will need to keep a close eye on your dog when you are outside and also if you have other pets in the house.

How Do You Care for a Borzoi?

As hunting dogs, these dogs require a fair bit of exercise to keep themselves in shape. This means that you should take them on long walks daily, and if you live in an area where this type of dog is allowed off-leash, you should give your dog a chance to run around your (securely closed) yard without that leash. If you have properly trained your dog and it has proven to be a good listener, you can even have your dog running beside you while you jog or bike. Just remember that your dog can run off in a moment’s notice if it sees something that it considers “prey.”

Thankfully, unlike many dogs, the borzoi has a coat that is quite easy to groom and doesn’t take a lot of time out of your day. You will want to use a firm-bristle brush and brush the coat a couple times a week. Very rarely you should consider bathing the dog, but keep in mind that bathing taller dogs can be problematic. You should clip fur between the toes to ensure that your dog’s feet are comfortable and that the dog isn’t slipping on the fur underneath its feet. You should also be prepared for your dog to shed heavily on a seasonal basis. While it will only happen twice a year, you will likely need to brush your dog daily to take care of all the shedding fur.

How Is the Borzoi’s Health?

Unfortunately, this dog is not the healthiest dog around, and this comes from rigorous breeding practices. Not only is it at risk for hereditary diseases that all purebred dogs are at risk for, these dogs are also prone to problems such as bloat, gastric dilation volvulus, heart problems, and bone problems. These dogs also have a considerably shorter life expectancy than most dogs, being closer to 7 to 10 years, occasionally reaching 14 years if you are lucky. 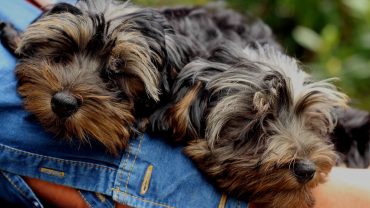