Naming your pet is the perfect occasion to express your creativity and choose a name with plenty of meaning. While some people prefer to go with something sweet and light for their pet’s name, others prefer a name with an edge.

Whether you want to give your pit bull a name that matches its stature or are picking out a name for your chihuahua that will tell people not to mess with it, here are some badass dog names to choose from.

In Latin, “Rex” means a ruler or a king. It was the title given to the ancient magistrates of the city of Rome, including such legendary figures such as Romulus. If you’re not familiar with the myth, Romulus was abandoned as a child with his brother and saved by a wolf before going on to found the city of Rome. How’s that for a legendary namesake?

Of course, you don’t need to be clued into ancient mythology to know how badass the name “Rex” is. It’s a common suffix when giving scientific names to large, powerful animals—which is how we got the name Tyrannosaurus Rex. It’s also a common name for fierce dogs, from Ronald Reagan’s pooch to a police dog on a popular European TV show. That’s a great legacy for your dog to inherit.

If you want a name that will strike terror into the hearts of passersby, then you can’t go wrong with Cujo. Cujo was a dog in a Stephen King horror novel that contracted rabies and turned on its family. The book was later turned into a movie, bringing fear to a whole new generation of people.

While hopefully this name isn’t a bad omen for your dog, it sounds powerful and will be a fun reference for people familiar with King’s work. This name is even more fun if you give it to a small, unassuming dog.

Sometimes, the simplest names are the most badass. Spike conjures up images of a pet that is dangerous and could protect itself at a moment’s notice, like a spike. Even the word itself sounds tough, with its hard consonants and forceful sound.

Spike is also the name of the tough bulldog father in Tom & Jerry. For many generations of cartoon-watchers, he was their first encounter with a badass dog. Your dog would have an excellent namesake to live up to (although hopefully less trouble with feuding cats and mice than the original Spike).

Belladonna, which means “pretty woman” in Italian, sounds like a pretty, lyrical name. However, the pretty syllables hide a deadly meaning. Although the belladonna plant was sometimes used as a medicine and as a cosmetic, its berries are highly poisonous and it was a favorite tool of historical murderers.

If you want to choose from badass dog names that are still beautiful, this is a good choice. It is a lyrical and pretty name with a meaning that still shows that your dog is not one to mess with.

One way to tell the world that your pet is a badass is to give it a name associated with a dangerous profession. A pet named “Bandit” will be associated with the centuries-long tradition of banditry and opposing authority, including legendary figures such as Robin Hood.

Other names in this vein include Villain, Killer, and Raider.

Brutus is one of the most common names, particularly for larger male dogs. In history, Brutus was a Roman Senator who participated in the assassination of Julius Caeasar.

However, you don’t have to be caught up on your ancient Roman history to appreciate the power of this name. Brutus sounds like “brutal,” which means something that is very violent and fierce. In Latin, Brutus was a common name for a man who was large and muscular. This means that there are multiple reasons why this name is for tough dogs only, not just one!

This list has shown that history is a common inspiration for naming dogs. While you could name your dog after a king, general, or legendary figure, why not pick out a unique name that’s still badass and name it Capone?

The name Capone comes from legendary Chicago gangster Al Capone, who ran the underworld in the Midwestern city during Prohibition and evaded the authorities for years. Besides his brutality in shutting down rivals, Capone was also known for his trickster nature and cleverness that helped him evade the FBI.

Although your dog may not be planning any heists more dramatic than a trip to the treat jar, this is still a name that will strike fear into the hearts of rivals at the dog park.

Motorcycles in general are kind of badass, and Harley-Davidsons are some of the most distinguished bikes out there. “Hogs,” as they are affectionately called, are known for their strong horsepower, distinctive, rumbling engines, and strong association with the freedom of the open road.

That’s a powerful legacy for your dog to have. Harley is an excellent badass dog name for a male or female. Plus, it comes with a built-in nickname. Just like everyone calls the bikes “hogs,” you can call your dog “hog” when you’re feeling affectionate—or when it gets into your garbage.

Mythology is a great source for badass dog names. Not only do you get to show off your trivia knowledge to passersby, your dog gets a name with plenty of meaning attached and a distinct aura of power.

One of the most powerful mythology-inspired dog names is Zeus. In Greek mythology, Zeus was the king of the gods and the god of thunder. There’s nothing more badass than a god so powerful that he rules all the other divine beings—and controls the sky to boot.

Other badass mythology-inspired dog names include Ares, Mars, and Hercules for boys and Athena, Hera, and Artemis for girls. You’re not limited to Greek mythology either. Thor, the Norse god of thunder (and popular Marvel character) is an excellent namesake, as is his trickster brother Loki.

One way to convey your dog’s power is to name it after a feared larger animal. “Bear” would make an excellent name for a mastiff or St. Bernard, any dog that inspires with its size. Other animal-inspired names include Gorilla and Tiger.

When choosing your dog’s name, you want everyone to know that your dog is not worth messing with. Whether you choose to draw inspiration from history, popular culture, or the natural world, you have plenty of options for fierce pet names. 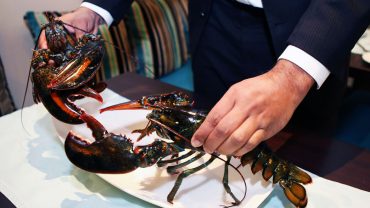