You might have noticed that dogs take a particularly keen interest in smelling each other’s behinds, and often take a long time smelling each other’s feces. They are simply trying to process the unique scent left behind by another dog. They can also trace it all the way back to the animal.

But, this isn’t the case under normal circumstances. The bacteria is flushed out whenever your dog has a bowel movement. But, when the sacs are swollen, the fluid isn’t able to flush out, and eventually gets infected.

As the fluid sacs get infected, they start turning bloody. When that happens, the sacs fill up with pus, and this eventually creates an abscess. It looks like a red, swollen, and incredibly painful bump on one or either side of the dog’s annus. If you do not flush it, the abscess is eventually going to burst.

This is going to release a foul-smelling liquid that is usually yellow with a tinge of green to it. In most cases, however, the pus is all bloodied. If you do not treat this problem, the infection is going to spread rapidly from your abscess and can lead to major damage to your dog’s rectum or its anus.

But, if left untreated, it will turn into a serious infection, and your vet will have to drain the abscess, and they might prescribe antibiotics and anti-inflammatory drugs.

There’s also a chance that your dog will become quite excessive with its licking habits and may start biting too. If you see the dog licking its behind quite often, you might want to take a closer look and find out exactly what’s wrong. In most cases, the dog might even start biting the base of its tail.

How to Treat the Problem? 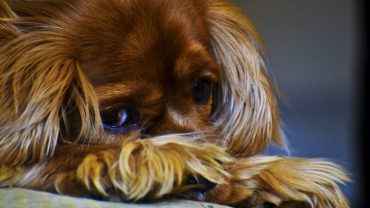