If you own a dog, you might have noticed it sneezing from time to time. Dogs often sneeze for the same reason that humans do – to clear their nose. It could be caused due to a pollen allergy or any other problem. Sneezing is simply a mechanism of the body to clear the nose. It usually happens when foreign matter, such as dust or pollen, enters the nostrils.

Dogs tend to sneeze for very similar reasons as humans. It could be due to dust or pollen entering their tiny little nostrils, or it could be due to an infection. While most causes of sneezing are completely harmless, there are others that indicate a serious problem. Why does my dog keep sneezing? Let’s find out.

Why Do Dogs Sneeze?

Dogs sneeze usually because there’s an irritant in the environment that is causing a problem in their nostrils. This could be an aerosol spray, or it could be dust. Dogs have a tendency to smell everything that they can, so if any foreign object enters their nasal canals, they are probably going to sneeze.

For instance, if your dog is digging into the ground and some dirt enters their nostrils, they are going to sneeze. Or, if a tiny little insect such as a gnat enters their nose, they will sneeze. However, there are a few dog breeds that are genetically predisposed to respiratory problems such as the Boston terrier, the pug, or the English bulldog.

Due to the fact that their nasal canals are genetically compressed, the sneezing could be caused due to a condition known as the brachycephalic airway obstruction syndrome. Keep in mind that sneezing isn’t the only symptom caused due to this syndrome. There are several others as well.

If a foreign object gets stuck in its nose, your dog is going to sneeze. They like to sniff at everything they can because of their inquisitive nature. If a dog inhales a blade of grass or a small bit of soil, it is going to sneeze to remove that irritant from their body. It causes a tingle that automatically initiates a sneezing response.

Dogs are also sensitive to household cleaners, aerosol sprays, and airborne chemicals. If you spray an air freshener around the house, make sure that your dog isn’t around. It’s always a wise idea to close the door so that your pet can’t enter, otherwise they are going to sneeze all around the house.

If you notice your dog pawing at its snout, it might be due to something getting stuck around that area. If sneezing doesn’t remove the irritant, your dog will start pawing it. You may want to look closely to determine what’s stuck in there. If you can’t find it, just take your dog to a vet and they will closely examine the nasal canals to figure out the problem.

This might come as a surprise to most people, but dogs also like to do something known as “play sneezing.” This is just their behavior, and it has nothing to do with their health. Play sneezing is definitely not something that you need to be concerned about; it just shows that your dog is happy in its surroundings.

The play sneeze is just a signal sent by your dog that it is happy and enjoying its time. It’s your dog’s way of saying that it is having fun. Dogs usually sneeze when they are playing with others. It’s just their way of entertaining themselves and other dogs. Think of it as a way that the animal uses to communicate with others.

Nasal mites are a problem and you will have to visit a vet to get the problem resolved. If your dog is sneezing in fits or there is blood coming out of its nose, it’s probably due to mites. Other symptoms include excessive facial itching or nasal discharge. These are tiny bugs that like to make their home in your dog’s nasal canals.

They also breed at a rapid rate, so your dog is going to experience serious discomfort if that happens. These mites are so diminutive in size (less than 1 mm) that you will have to look really hard to spot them. More importantly, you should know that mites are contagious, and the infection can spread from one dog to another.

If you notice this problem, you need to isolate your dog from others and take it to the vet as quickly as possible. This requires immediate attention, and your vet will recommend either oral medication or topical creams that must be applied on the affected region. Within a few days, the mites will be gone.

A fungal nasal infection can cause labored breathing in your dog. Older dogs are mostly susceptible to nasal infections, though any dog that inhales mold or anything harmful could be affected. Your dog will start sneezing, and it may develop a runny nose. Your dog’s nose is also likely to swell due to the infection.

It’s definitely not a pretty sight, and you will want to make sure that you take your dog to a vet for a closer inspection. Sinusitis is a serious condition that causes excessive sneezing. The good thing though is that conventional antifungal medicine or antibiotics are an effective treatment for such infections.

You just need to visit a vet and they will tell you what medication to give. Within a few days, your dog will be absolutely fine.

This is a serious condition that affects larger breeds and is most prevalent in older dogs. Nasal tumors are likely to be malignant, so your dog will have to be put down if the cancer spreads throughout their body. One of the major signs of a nasal tumor is sneezing, and it could also lead to a bloody nasal discharge.

Facial swelling also tends to occur as a result. Because it’s so close to the nasal canals, the brain is also likely to be affected as a result, which could lead to a much bigger problem. You may want to visit a vet for treating the condition or figuring out the next steps. 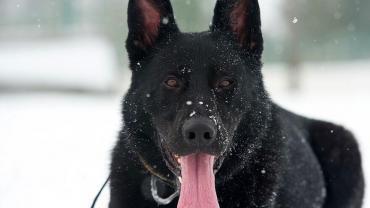