Anyone who has spent significant time with a cat has likely been licked by one at some point. For some, this can be a puzzling experience, since it isn’t always clear why a cat may approach and lick you or even continue to lick you for an extended length of time.

Although peculiar, there are a few reasons why this behavior is common among cats and may even provide some insight into how the cat perceives the relationship that it shares with you. If you’ve ever wondered why do cats lick you in such unexpected moments, you may be amazed to learn the logic behind their actions.

Reasons Why a Cat May Lick You

Sometimes decoding a cat’s behavior and instincts can be more simple than you might expect. Further examination of how cats interact and socialize with each other can provide helpful hints as to why they tend to lick humans. Although there are many reasons why this can occur and many motives that exist behind this behavior, most will fit into one of the following six categories of why a cat may lick you. In some instances, you may notice that these reasons may overlap with each other, particularly when a cat’s licking is connected to expressing affection or social bonds.

Like many other animals, cats can be territorial and take specific actions to mark their territory. Marking is a cat’s way of letting other cats know that you belong to them, and although cats may commonly mark objects and other animals, it’s not uncommon for them to mark people as well. When licking occurs as a form of marking, it adds a deeper layer to this concept.

Cats lick each other as a way to show affection and bond with each other. If a cat is licking you, this may be its way of communicating that you share a bond or indicating affection toward you the only way a cat knows how. If another cat avoids you after you have received attention from a previous cat, it may be because it detects the scent of the cat that has licked you and now knows to stay way due to the marked territory.

If you are petting a cat and it begins licking you, this is the cat’s way of trying to similarly reciprocate the affection that you’ve been offering. Alternatively, if a cat randomly starts licking you, it may be a sign that the cat likes you and wants extra love and attention. Kittens tend to lick people more frequently and may use this as a gesture to try to soothe your emotions or bond further with you.

Although we don’t fully understand emotions in animals or cats specifically, there is some indication that cats experience anxiety. One way that cats attempt to relieve this anxiety is by licking themselves or other people. It is typically more common for cats to lick themselves when they are anxious, which can sometimes hurt the health of their skin and fur.

However, some cats will also resort to licking you as a means of relieving their anxiety as well. If you’re wondering how to discern whether a cat is licking you for anxiety relief or to express affection, anxious cats may lick you for an extended period or may have a body posture that reflects tense or edgy emotions. If you suspect that your cat is licking you due to anxiety, you may want to consider interactive playtime to help distract them from their stress.

As you might expect, a very common reason why cats lick people is because this is how they groom themselves. Cats tend to be very interested in grooming themselves, and grooming is also used as a means of bonding. In a group of cats, there’s usually one cat that spends time grooming the other cats by licking them.

When a cat is licking you for the purpose of grooming, it can be the cat’s way of trying to communicate to you that they perceive you as one of their own or welcoming you into their social group. If you think your cat is trying to groom you, it may be a nice gesture to return the favor by using their favorite grooming brush or your fingers to gently target various areas on their body.

Sometimes cats that have been orphaned or separated from their mothers too early can experience socialization issues. This can result in licking more often than what would typically be normal for a cat that was weaned correctly. As a result, cats with socialization issues may be more likely to lick you. Once more, this is connected deeply to affection and how cats perceive licking since its often a calming and enjoyable experience for them. Licking can be a sign of trust in this instance.

Cats are interested in different flavors just like humans are, and when they taste a flavor they’re not familiar with, they’re curious to learn more. If you’ve been handling food or anything else that may have left a flavor or a scent, your cat may be licking you because it hasn’t encountered either before and finds it interesting. Additionally, salt can develop on the skin throughout the day due to sweat and general activity, and this can sometimes cause a cat to continue licking you for a few moments longer than usual.

How to Make a Cat Stop Licking You

If you think that your cat is licking you too much and it’s making you uncomfortable, there are ways to make it stop. Of course, this should be done with some careful consideration since licking can have many social implications for a cat. Since cats generally use licking to communicate their care or interest in you, they don’t perceive that licking can cause discomfort or become unnerving.

When you make an effort to stop the cat from licking you, you might accidentally communicate that you are not interested in further bonding, or you might unintentionally overlook the cat’s expression of anxiety.

In any case, the best way to address the situation is to redirect the cat’s attention in a positive way to prevent any potential negative outcomes in your relationship. Some great ways to make your cat stop licking you without causing distress or discomfort can include gently grooming your cat with a brush, providing interactive play, or offering the cat various forms of mental and physical engagement to participate in without directly having to interact with you. A cat that is distracted or has other pursuits it can actively participate in when you’re around will minimize licking and learn to interact with you in other ways.

Although it’s impossible to fully understand why cats behave a certain way or why their behavior varies so much at times, it is possible to derive a general understanding of their intentions. Excessive licking can become annoying or physically uncomfortable at times due to the rough sensation of a cat’s tongue on your skin. However, keep in mind that cats will only lick you to communicate their affection or as a means to seek comfort when they are feeling anxious.

Being mindful of why cats choose to act this way can help you understand the best way to react to them or distract them based on your preferences. If a cat is interacting with you in this way, your attention is particularly valuable to them, so it’s important to provide a loving and supportive response that will maintain their trust. As long as you react with sensitivity and mindfulness, you’re certain to form a long-lasting bond with your feline companion! 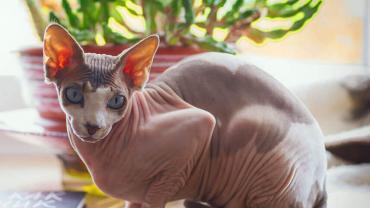