Home
Pet Care
What Should You Expect as Yorkies Grow?

Yorkies are the type of dog that people either love or hate with very little middle ground between these opinions. On one hand, yorkies have an iconic and lovable appearance and their small size is something that most people can appreciate. On the other hand, these small troublemakers can be loud and hyper, and they need a lot of grooming to keep their fur looking nice.

If you are thinking about adopting a yorkie, one thing that you will want to think about is what you should expect from the yorkie as it grows and matures. Because these dogs are often considered designer breeds, most people will adopt them as puppies from a breeder, which means that they will be raising them from a very young age rather than adopting them as adults from a shelter.

One of the biggest differences in raising a dog from a young age in this manner is that you will have to factor in their growth when taking care of them, feeding them, and generally caring for them. As such, it will be important for you to know what to expect from your yorkie.

How Big Do Yorkies Get?

Before you begin to think about when do yorkies stop growing, you will want to know how a yorkie will look when it is done growing. Yorkies, properly known as Yorkshire terriers, are considered to be small dogs, weighing in at an average of seven pounds. However, they are also notorious for having a lot of variation despite being purebred dogs. Their healthy adult weight can range anywhere from under four pounds to about fifteen pounds.

Part of this is due to the prevalence of miniature and teacup versions of the yorkie. These versions are simply the same breed of dog but specifically bred to be much smaller than the original breed is. There is a fair amount of controversy surrounding this practice, as it can result in health problems and a shortened lifespan.

Part of this is due to the fact that yorkies, as a whole, are just fairly inconsistent as a breed. A perfectly healthy yorkie that hasn’t been bred to be a particular size may give birth to a few large puppies or numerous tiny puppies. In general, you should expect that a healthy yorkie is going to be between four and six pounds as an adult and will stand at eight or nine inches in height.

The Stages of a Yorkie’s Growth

As with most dogs, yorkies have different definable stages of life that they go through as they age. This happens regardless of what size dog you choose to adopt, though the exact numbers of weight and height will vary. There are four stages that you will want to note, with each one requiring different levels of care and different focuses so your dog can grow up properly trained and socialized.

The first stage of life will be from birth to about three weeks of age, which can be considered the newborn stage. The puppy won’t do much and will be almost entirely dependent on the mother. The second stage of life is from their third week to their fifth week, which is when they start having some curiosity about the world around them as they develop their sense of hearing and sight. The third stage is from their fifth week to their twelfth, as they move on to solid foods and become truly interested in the world around them. The fourth and final stage lasts until about seven months of age, and will be the process of developing their own behavioral traits.

After seven months of age, your yorkie’s personality will have come through in full. Your yorkie will still be growing physically and a little bit mentally, but the main stages of being born and developing senses and learning about the world will be over. From here, your yorkie will continue growing until it is about one year old, reaching its full height around this age.

From Birth to Eight Weeks

This is the period of time where your yorkie will mostly be dependent on the mother. Most reliable breeders won’t let puppies be adopted at this stage (as they rely almost exclusively on the mother), so this only applies for people who are raising yorkies from birth. Much as with human infants, they will grow exponentially during this time.

Most yorkies weigh between three to five ounces at birth. They will be pretty stationary at this point, with their eyes closed and being unable to hear. They will stay close to the mother during this time because of this. As eight weeks pass, the puppy’s weight will increase to about 32 ounces, or about two pounds, which is a pretty drastic increase in weight from birth.

This will also be the stage where they open their eyes, begin to hear, and are weaned off the mother’s milk. Potty training will begin from here as well, and they will move from crawling and scooting along the ground to walking and prancing as they explore the world.

From Eight Weeks to Six Months

This is the stage of life where your puppy is going to be the most puppy-like. They will grow quickly, potentially doubling in size within the first few months and again later on. They will be unruly but will tire easily as they are still young puppies. This part of its life is going to be where training is as important as possible, as your puppy will be in its prime to learn.

Chances are that this is the stage where the most problems begin, as yorkies are notorious for behavioral issues as well. They will be yappy and destructive, and they will likely “rebel” against you as if it were a teenager. This is the stage of life where patience for training is crucial, as it will go a long way toward developing the puppy’s adult personality.

From Six Months to Adulthood

After the first six months, this can be considered the period of time where your yorkie has gotten a grasp on training and has some sense of how to behave. It may still act up at times, but at this point, the training should stick a fair bit. This is where the puppy begins to truly mature into adulthood, with its growth dramatically slowly at about the nine-month mark. It will grow slightly more in the next three months, reaching its adult height at about one year.

This is the stage of life where socialization is the most important. Now that your dog has a grasp on training and listening to you, or at least it should, you now need to introduce your dog to other people and other dogs so that it can learn how to behave. Even if you don’t own other animals, this is an important concept for the dog to learn at this age so it doesn’t develop anxiety-related conditions due to not being used to being alone. 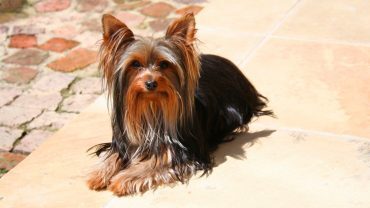