Many people who eat a vegan diet believe it’s kinder to eat meat-free—kinder to their own bodies, kinder to the planet, and kinder to other animals. So the thought of buying meat for their pets, especially mass-produced meats, is a really tough conundrum. There are brands creating dog and cat food from free-range animals on small farms. But even then, vegans find it a tough ethical decision.

Unfortunately, it’s also a decision many pet owners don’t feel comfortable making. Is it safe to feed your pet a vegan diet? Will they get all the nutrients they need? Thankfully for vegans and vegetarians, demand for vegan pet food has risen, and more brands and veterinarians are working to provide pets with safe, meat-free options.

Unlike cats, who are obligate carnivores, dogs are actually omnivores. This means they can safely eat meat and plants. Just like humans, dogs can survive and even thrive by omitting meat from their diet. But just like with vegetarian humans, it can require a little extra work. Vegan humans have to pay more attention to the nutrients they’re taking in through food, and often supplement with vitamins like B12. The same is true for vegan dogs. Dos Santos, president of the British Veterinary Association (BVA), advises that dog owners adopt a vegetarian diet only with help from a veterinarian nutritionist.

Certainly, feeding your dog soy milk and rice isn’t going to cut it. There’s a lot of misinformation on the internet as well as an actual lack of science. Trusting your neighbor’s opinion about giving dogs turmeric isn’t the same as asking an expert. And even when you do ask your vet, they don’t have many studies to reference. Still, they have access to more information than you do, and their experience is certainly worth something.

Like many vegan dogs, Bramble was raised and cared for by a vegan human. Anne Heritage cooked food for all of her dogs, mostly feeding them lentils and veggies. All the vegan dogs lived long, healthy lives, but Bramble’s life-span was record-breaking. She lived to be 25 in human years, which is nearly 15 years more than an average Border Collie. Bramble’s long, healthy life as a vegan dog has been an inspiration to many vegans who want to raise their furry friends on a plant-based diet.

Alicia Silverstone is most famous for her roles in movies like Clueless and Batman & Robin, but she’s also well-known in the vegan community. She’s written books about living a vegan lifestyle and raising children vegan. But she’s also spoken publicly about raising vegan dogs. In a blog post, she writes: “Personally I can’t justify killing one animal to save or feed another. If you feed meat to your dogs, that’s what we are doing – deciding that one life is more worthy than the other.”

Gentle World is a vegan education center based in Hawaii and New Zealand that has been home to many vegan dogs. Over the years, Gentle World has housed several dogs, including a Collie and a Great Dane. All of their dogs have successfully been fed plant based diets. Barring preexisting health conditions, these vegan dogs have lived well into their teens.

To Meat or Not to Meat

If you’ve spent time researching this topic on the internet, you’ll find a fair number of conflicting opinions. Some vets think feeding your pet a vegan diet is dangerous, and others think it’s perfectly safe. If you’re hoping to avoid animal-based purchases for you and your pet, give these vegan dog foods a try. Plenty of dog owners make their own food, but buying a prepared dog food can put your mind at ease about whether or not your dog is getting adequate nutrition.

Ultimately, no one knows your dog the way you do. If your dog doesn’t react well to this diet change, check with your vet. But these vegan dog food brands are a great place to start, and any of them will make a great starting point. Good luck on your meat-free dog food journey! 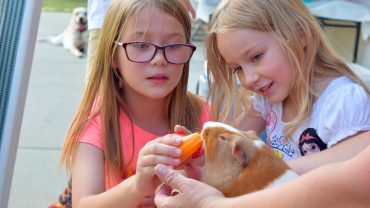