Home
Pet Care
What Is a Reverse Sneeze, and What Does It Mean for Your Dog?

Most dog owners are used to hearing their dog sneeze every so often. Some dogs can sneeze more loudly than others, while other dogs may have sneezing fits where they don’t stop sneezing for many seconds at a time. Regardless, most people are well aware of dog sneezes, what they mean for their dogs, and what they sound like.

What most people aren’t aware of is the reverse sneeze. This phenomenon, which is medically known as paroxysmal respiration, is a fairly common condition that mainly affects miniature/toy breeds, brachycephalic breeds, and breeds with longer snouts. If you have a dog that fits one of these characteristics, there’s a good chance that you will have actually heard a reverse sneeze before.

Reverse sneezing, while it can sound incredibly worrisome and may look uncomfortable for your dog, are almost never something you should worry about. In a sense, they are about as effective on your dog’s overall health as standard sneezing is. It is something that happens, sometimes triggered by the environment and sometimes unprovoked, but your dog will go about its day after the sneezing fit is done.

Is Your Dog Okay?

Even though the sound can be downright terrifying to hear, once you establish that your dog is not choking on anything, you can relax, as the reverse sneeze in dogs is nothing to be worried about. It is completely harmless for the dog, it does not affect their long-term health, and it doesn’t bother them aside from the momentary incidence of the episode, which can last anywhere for seconds to one minute.

Your dog will make a noise that will sound similar to wheezing or snorting as it rapidly inhales over and over again. The dog will typically stand in one place with its head and neck extended out during the episode. The sound can be similar to that of a choking episode, so you should make sure that your dog is not actually choking, but once you establish this, you can just focus on keeping the dog calm while the episode passes.

You don’t necessarily have to contact your veterinarian about this problem. Some people may feel more comfortable having a vet reassure them that it was an episode of reverse sneezing, while other people may want to rule out the chances of anything else going on, which is a smart thing to do. More often than not though, the vet won’t be able to do much about it aside from giving you advice on how to manage the condition.

Now that you know that these episodes are about as harmless for your dog as a standard sneezing fit, you might be wondering what in the world happened to cause your dog to make those noises. The truth is that the full mechanism of this condition is not known, but there is a fair amount of speculation on various aspects of it.

It is believed that when the back of the dog’s throat or its soft palate is irritated by an allergen, odor, or change in temperature, it can trigger an episode of reverse sneezing. Think about the way that allergens can trigger a normal sneezing fit and apply that mechanism of action to a fit of reverse sneezing. It is believed that the brain sends signals to your dog’s lungs to do this to try and get rid of the irritant.

There is also some evidence that shows overexcitation and overstimulation can trigger one of these episodes, meaning that there may be a more neurological component to this than there is with your standard sneezing fit. Unfortunately, the exact details aren’t fully understood, but most common irritants such as pollen, dust, grasses, allergies, and smoke are known triggers for this condition.

Can it Be Treated?

This condition isn’t fully understood, so there isn’t a clear-cut way to stop or treat the episodes. A lot of what the remedies are for it are going to be circumstantial. This also means that the methods that work for some dogs are not going to work for others, so when your dog has an episode of reverse sneezing, it will be a matter of figuring out which method works best.

For dogs who have repeated, chronic, and allergenically caused episodes of this condition, some veterinarians may consider antihistamine prescriptions to keep the allergies under control. Unfortunately, this doesn’t always help dogs who don’t have allergies or for dogs whose triggers for it are not related to irritants and allergens, such as excitement and temperature changes.

Rather than permanently preventing episodes from occurring, what most people do is they focus on calming the dog down and taking care of it in the immediate fit of reverse sneezing. Doing this can not only shorten the episode of sneezing, but it can also make sure that your dog is comfortable because even if it causes no harm to the dog, nobody enjoys having to stop everything and have a sneezing fit, even if it’s in reverse.

How Can You Help Your Dog?

There are ways that you can work with your dog to try and comfort it and potentially shorten the episode. For dogs whose episodes only last a few seconds, these may not be necessary. For dogs who have episodes that last closer to a minute long, you may feel more comfortable trying to offer comfort to the dog, and there’s a good chance that the dog will appreciate the affection.

The first step is to move your dog from whatever may have triggered the change. This could be moving away from the allergen or irritant, moving back inside (or outside) to revert the change in temperature, or to settle down and stop playing if the dog is becoming overly excited. This will help minimize the exposure to whatever started the sneezing fit, increasing the chances that the fit won’t last as long.

From here, you can comfort your dog by talking to it in a soothing voice and rubbing the back of its neck, which will be as close to the area affected as you can get. Some people may try and blow lightly on their dog’s face, causing the dog to swallow and stopping the episode (if it works), while others will cover the dog’s nostrils very briefly to produce the same effect. Other people may try and get close to their dog and hold its abdomen or trunk, but this isn’t quite as effective for most dogs.

For the most part, waiting it out won’t hurt you or the dog, but if the noise is upsetting you, these are the methods that you should try to use so that you can help your dog get over the episode. 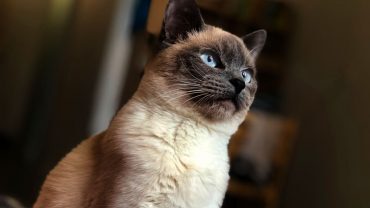