Lots of people spoil their dogs when it comes to food and why wouldn’t they? Dogs are masters at being able to manipulate their humans into giving them snacks. Many dogs will beg adorably and wait for the right time to grab some leftovers right off the plate,or eat the same fruit as we do. It makes sense that many owners would also think that whatever they eat, their dogs can also eat but this is not always true.

Can dogs eat fruits?Why Is There a Problem?

The truth is that dog digestive systems are different than ours. This means that they can be sensitive to certain foods that we find just fine.

For example, most dog owners know that chocolate is bad for their dogs. It contains a compound called theobromine which can be fatal in large enough quantities. Doggy digestive systems can’t break this down and many dog owners find themselves at the local veterinarian late at night.

Is Chocolate Really That Bad?

Things are rarely black and white and so simple in life. When it comes to chocolate, it’s wise to bear in mind a few things. Theobromine is largely absent in cheap milk chocolate varieties, or it is present in only small quantities. In fact, it is dark baker’s chocolate and boutique dark chocolates that contain the most theobromine.

What this means is that if your pooches get into your cheap milk chocolate Easter eggs, they might have upset stomachs but they are not likely to succumb to theobromine poisoning. In fact, large dogs have been known to eat chocolate mud cakes without much consequence.

This also points to another complexity when it comes to toxicity. The size of a dog also makes a difference when it comes to how it reacts to ingesting a toxin. The larger the dog is, the less likely it is that it will be very ill.

Of course, none of this means that you should go out and feed your dogs chocolate, even if it’s just cheap chocolate. It’s not good for them anyway even if it doesn’t contain a whole lot of theobromine. But what about other things, such as fruits?

Fruits That Dogs Should Not Eat

If you regularly give your dogs fruits from your table, you should think twice about whether it’s any good for them. Apart from dark chocolate, some fruits can make dogs sick even if it’s not fatal. And as a dog owner, you really don’t want your precious pooch to be ill. In the interests of keeping dogs safe and sound, here are the fruits that you should avoid feeding to them:

Avocado is not great for dogs because many parts of it contain a compound called persin. If your dog ingests enough of this compound, it may experience vomiting and loose bowels.

As with chocolate, though, the answer here is not black and white. It is true that persin is not good for dogs. It can definitely make them sick. However, the insides of avocados don’t contain much of it at all.

In fact, there are even special dog foods that contain processed avocado flesh. Why, you might ask? The truth is that by the time the avocado has been processed, there’s no danger from persin.

The short answer is that dogs shouldn’t eat cherries. You should definitely not give them whole cherries to eat at the very least.

The stem and the pit of the cherry contains small amounts of cyanide. This can absolutely be harmful to dogs. The good news is that the flesh doesn’t contain cyanide and this is what most humans eat. But dogs are not fussy and will simply eat an entire cherry if it’s on offer, including the stem and the pit.

Grapes are a tricky one because some dog owners feed their dogs grapes in hot weather and there’s no problem at all. But there have also been reports of dogs becoming very ill and developing kidney failure after eating grapes or raisins.

The truth is that it’s not actually known why or in what way dogs may be allergic to grapes. While there have been some stories of dogs becoming very ill after eating grapes, it’s also possible that those dogs were exposed to something else or that the grapes were covered in some type of fungicide or strong pesticide that caused the sickness.

As with chocolate, it’s easy for some of these things to become urban myths. Having said that, there are cases of renal failure after eating grapes so it’s probably best to keep grapes and raisins away from your dogs anyway.

Tomatoes contain a heap of great vitamins and nutrients that are also good for your dog but you should avoid giving your pooch tomatoes just to be on the safe side. Why is this?

Most of the tomato is just fine for dogs as long as it’s red and ripe for eating. The problem is that the green unripened parts of a tomato contain a chemical called solanine. This is not good for dogs and will make them sick if they ingest enough of it.

Tomatoes are commonly eaten by many people every week so it’s no surprise that dogs often eat them as well. If you find that your dog has ingested some tomatoes, it’s important not to panic. As long as they were red and ripe, the dog is probably going to be just fine.

Fruits That Dogs Can Eat

If it seems as though your dog is pretty restricted in its diet, it’s because they are actually carnivores. In fact, they don’t even need fruit and vegetables to survive. While some fruits should not be given to dogs, here are some fruits that are just fine for your pooch:

Lots of people love eating bananas; luckily, your dog can eat them too. There’s no harm with them and in fact they contain plenty of good things such as potassium, fiber, and vitamins.

They also contain fruit sugars so you don’t want to be giving them as a treat to your dog all the time, though.

Apples are great for humans but it turns out that they are also pretty good for dogs too. They are also safe for them to eat, which is a bonus.

The only thing that you might want to do is take out the seeds and the stem before feeding them to your dog. So the next time that your dog nabs a slice of apple pie off your dessert plate, you don’t need to worry about rushing it to the local vet for attention.

Dogs might not be able to eat grapes or raisins but they can definitely eat strawberries. The really good thing about strawberries for dogs is that they contain an enzyme that can help to keep their teeth white.

On a hot day, your dog needs lots of water and rest. Dogs can easily overheat, which is why many dog owners turn to the humble watermelon.

The flesh of the watermelon is great for dogs. It is also mostly water so it won’t harm them and will keep them hydrated on a hot day.

Keep an Eye on Sugar

If you really want to feed your dog some fruit, just remember that they are carnivores. This means that they don’t actually need any fruit or vegetables in their diet in order to get through life, unlike humans. Having said that, most dogs will eat just about anything and any fruit you offer will give them a taste that they might find nice for a change.

What you should remember is that apart from the fact they don’t need a lot of fruit, fruits also contain sugars. These natural sources of sugar can be bad for us and for dogs too. In this context, only give your dog fruits sparingly rather than every day as part of its diet.

Dogs are loyal friends but sometimes their appetite for food gets them into trouble. Unlike us, dogs are not always very fussy about what they put in their mouths. This can lead them to eating foods that should really be restricted to human consumption.

You might have heard about dogs and chocolate but there are a number of fruits that are not healthy for dogs and may even cause serious harm. However, it is important to place all of this in context and understand that news travels fast and urban myths travel even faster.

This means that while you should avoid feeding your dog some kinds of fruit, you should also not panic because there’s a little more to the story than some sources would have you believe. 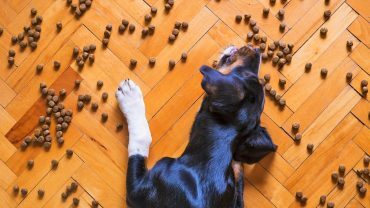