Adjectives can be tricky things. There are the words we use to describe something, and then there are the actual meanings underpinning those words, and sometimes the two don’t line up perfectly.

Take “lip smacking,” for example. We can refer to delicious foodstuffs as “lip-smacking good,” and yet that’s not what’s meant when the term is applied to your dog licking and smacking its lips over and over.

So what’s behind this “dog smacking lips” phenomena? As it turns out, just as there are many “lip-smacking good” dishes, there are many reasons why dogs may smack and lick their lips.

Credit Pavlov for this one. This is an example that does fit in with the lip-smacking goodness of deliciousness typically by us. Licking one’s lips is one of the most universal signs that they are eager to eat whatever’s about to be served. A dog’s mouth starts producing saliva at the sight or smell of food to help aid in digestion, which can cause the dog to smack its lips.

As such, it’s pretty easy to identify this as the potential cause of your dog’s lip smacking – if food is present, or you’re cooking something, it’s probably the reason. In fact, your dog may start salivating and smacking its lips even when no food is present but other triggers that the dog associates with food are.

For example, if you wear certain clothes or play certain music when you cook or feed your dog, the sight or sound of these can be associated with food in the dog’s mind, and thus get the dog salivating.

At the other end of the deliciousness inspiring the first explanation for why dogs lick their lips is this far less appetizing option. The urge to vomit also has the potential to trigger salivation in dogs and humans, which in turn can result in them smacking their lips or swallowing. If you’ve ever seen someone swallow repeatedly trying not to vomit, this is a likely reason why.

It is less clear why saliva is present when a person or dog is nauseated as well as when they’re ready for food. Some think it may be a mechanism for protecting the throat, teeth, and mouth from the highly acidic nature of the stomach’s contents being vomited up again.

Thankfully, most such instances end with the person or dog successfully gulping back the urge to vomit.

Animals communicate anxiety and uneasiness in a wide variety of ways, and lip smacking can be one of them. If your dog is worried about something, you may see it flip its tongue in and out in a sharp, quick manner. This is another case when context is important.

For example, if your dog flips its tongue out during or after loud noises, it’s probably afraid or upset by them.

If you have pain in your mouth or are unsure of what’s going on in there, one of the first things you do is probably head to a mirror to inspect your teeth and gums, or else feel around with your tongue. The same holds true for dogs, minus the mirror. They obviously can’t view their reflection to see what’s going on, so they resort to the second, lick-centric method.

However, while a dog can’t look inside its own mouth, you should do so for them or get them help from a dog-servicing dentist if your dog displays signs of mouth problems. Dogs can have just as many oral and dental problems as humans, ranging from gum issues to periodontal diseases, and the last thing you want to do is allow these to go untreated.

Sometimes, instead of a sign of anxiousness, a dog smacking its lips could be an indication that it is trying to calm itself or others around them. In this case, smacking its lips may be intended as a pacifying statement to try and diffuse what it perceives to be a tense situation. If there is some conflict going on and your dog is smacking its lips, this may be why.

Dogs love attention. It’s one of the core elements of our relationship with Man’s Best Friend. We love showering them with attention and they love getting it. If things are calm and your dog isn’t licking its lips for food or out of anxiety, your dog may be trying to get your attention.

This kind of behavior reinforces itself over time – the more you reward them with attention for licking their lips, the more likely they are to do so again in the future. That said, dogs can also do this if they feel deprived of attention. If your dog only licks its lips in your presence and your dog seems a bit lonely, it may just want a bit of attention and love.

If your dog feels pain, it may convey its discomfort in a variety of ways, from whining to yelping to smacking its lips. Once again, context is key here. If your dog is showing signs of distress and is also smacking its lips, it may be anxiety, or it may be physical pain. Either way, your four-legged friend is probably feeling unwell and you should try to help it.

In fact, lip smacking can be an early warning sign for several serious conditions, including kidney and liver disease. That said, it could also be any one of the other issues on this list, simple dehydration, or no problem at all, and just be your dog excited over food. It could also indicate a partial seizure.

If that sounds maddeningly uncertain, that’s because it is. You really need to use context clues to determine the most likely cause. For example, if your dog has a history of seizures, or takes seizure medication, the lip smacking may align with that, whereas if they haven’t had enough to drink, dehydration is probably more likely. Use your best judgment, and when in doubt, consult a vet.

As you can see from all of this, there are many potential reasons why your dog may be licking and smacking its lips. In fact, there are so many permutations to these possibilities that a single list can’t do justice to them all. Pain, pleasure, and everything in between can manifest itself for your dog in a number of ways, lick smacking included.

You know your dog, and thus should know its habits. With that information and context clues, you should be able to get some idea as to why your four-legged friend is licking and smacking its lips. 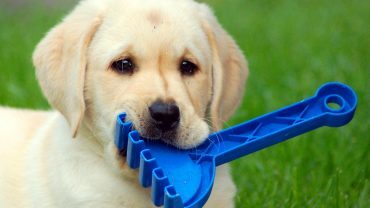