Home
Pet Care
Why Is Your Dog Gagging but Not Actually Throwing up?

One of the less enjoyable aspects of owning and caring for a dog is going to be the times when your dog throws up, has an accident, or another similar situation. No matter how well-trained your dog is or how well you care for the dog, it is inevitable that your dog is going to make a mess one way or another. This is the kind of commitment you make when you take in an animal.

This behavior is not nearly as common in dogs as it is in people, which is why it can be a cause for a bit of concern if you see your dog acting as if it needs to throw something up, but is simply unable to get anything to come out. There are few things that you need to know about gagging and why your dog might be doing this without throwing up, and when it is a problem severe enough to warrant emergency medical attention.

Why Do Dogs Gag in the First Place?

Gagging is a fairly similar mechanism in your dog’s body and brain as vomiting is. More often than not, the basic reason for why your dog is gagging is that it is trying to expel mucus from its throat. It should not be confused with dry heaving, which is when the dog is trying to vomit but there is nothing in the stomach to vomit.

Dogs will also gag in an effort to remove foreign bodies, due to illnesses, and from illnesses affecting the respiratory system. Because of how many reasons there are for dogs to gag, it would make sense that there would come a time when your dog feels the need to gag, though keep in mind that prolonged gagging is typically a reason for medical attention.

When all is said and done, it is important for you to make sure that you know whether your dog is gagging or whether this was dry heaving. A good way for you to tell is that gagging will often involve your dog coughing up mucus from its throat, especially if your dog is sick and congested. Mucus is pretty easy to differentiate from what comes up during dry heaves, allowing you to know what to do with your dog.

Another distinction you may need to make is whether or not your dog is actually gagging or if it is simply dry heaving. While the two are very similar in presentation, their mechanism is a little bit different, and as such, their reasons for happening are also slightly different. To put it simply, gagging can be thought of as a spasm of the throat and dry heaving is when your dog cannot properly throw up.

Gagging is a symptom that primarily affects the throat. It tends to happen simultaneously with vomiting or dry heaving, which is why it is sometimes used interchangeably even though the other two are related to the stomach and digestion. What this means is that not only can gagging be confusing to differentiate from dry heaving, but it can also be caused by issues affecting the throat and lungs.

By comparison, dry heaving is strictly a digestive issue. It is vomiting without the vomit due to the fact that there is no food in the stomach for the dog to actually vomit up. Its mechanism of action is the same as vomiting, so its causes are generally the same, and dry heaving may follow a period of vomiting because a dog could empty the contents of its stomach.

The Causes of Gagging in Dogs

Gagging is centered around the throat and it happens when the throat spasms, so most of the causes for gagging in dogs tend to be respiratory problems and other issues with the throat and lungs. Common examples that you may encounter throughout your dog’s life include foreign objects in the throat or mouth, respiratory illnesses, parasites, and tracheal problems.

Dogs can get something lodged in their throat, mouth, or esophagus pretty easily, especially if you aren’t paying attention to them. Toys that they can chew and swallow as well as food that is too small for your dog to chew are common culprits for this. As for respiratory illnesses, they are usually transmitted through contaminated objects and through the air, especially for contagious illnesses such as kennel cough (aptly named because of its prevalence in kennels).

Parasites, heart disease, and tracheal issues are all much rarer causes of gagging in dogs, but they can also present some of the more serious complications and side effects in addition to the gagging. Because of this fact, if you notice that your dog is gagging more than the occasional once in a blue moon when your dog gets a cough, you should consider having your dog examined by the vet.

When Should You Take Your Dog to the Vet?

If your dog seems very distressed while it is gagging, such as clawing at its mouth, or if it is gagging so much that it does not seem as if it can breathe properly, these are emergent situations. If your dog is gagging due to an obstruction, you need to get your dog to a vet or you need to remove the object yourself if you are able to. These are situations where the gagging can interfere with your dog’s health significantly.

Otherwise, if your dog gags occasionally and it never seems to happen more than once over a long period of time, you likely won’t need to make a vet appointment. If you are curious about why your dog might be doing this, you could call your vet and ask, but there’s a good chance that there won’t be a clear reason for highly occasional gagging.

Gagging that happens more frequently or has a sudden (and severe) onset tends to be due to an illness or a problem with the body. Depending on how intensely your dog is gagging, you will want to make an appointment with your vet quickly enough that you can get the problem under control. The best way that you can keep your dog safe and healthy is to monitor what it is trying to eat and play with, making sure that it doesn’t interact with sick dogs, and knowing how to differentiate a gag from a cough or a dry heave. 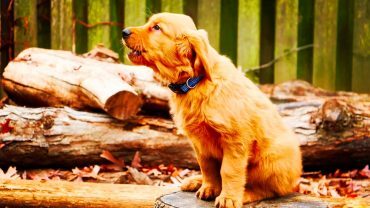