American pitbull terriers (APBT) are gaining popularity as more people realize what loving, loyal companions these dogs can be. Besides, Pitbull puppies are adorable too.

Obesity is a common health issue for adult Pitbulls. On the other hand, being underweight can be a symptom of illness. To find the correct balance, you might need to monitor your puppy’s weight carefully.

Along with early socialization and obedience training, paying attention to your puppy’s health can help them grow into a happy, healthy dog. But what is a healthy weight for your Pitbull puppy?

Obesity is a common health concern for Pitbulls. It often leads to breed-specific health problems, like heart disease and hip dysplasia. Alternatively, you may be navigating wellness challenges with your puppy and monitoring them to ensure they gain weight appropriately.

Fortunately, with your veterinarian’s advice, you can identify a range of healthy weights for your puppy. However, it’s not advisable to force your healthy puppy to attain a specific weight.

Where possible, puppies should be with their mothers until they are eight weeks old. During this time, the puppy’s development, including weight gain, should be monitored with a professional’s involvement.

American pitbull puppy weights will vary depending on their gender, and whether they are hybrids or purebred. By the age of eight weeks, most purebred American pitbull puppies will weigh between 9 and 15 pounds. After that, you can expect your puppy to gain 1 to 3 pounds per week steadily.

Growth spurts can also occur, especially between three and nine months. However, hitting specific weight goals shouldn’t be your sole focus unless you are directed otherwise by your vet. Your primary goal is to make sure your puppy is thriving. If you can feel your puppy’s ribs, but they are not visibly prominent or buried under a thick layer of fat, your puppy’s weight gain is probably on track.

American Pitbulls are large, stocky dogs and though you may see a slight outline of your puppy’s ribcage under their short, shiny fur as they begin to grow, you should not expect them to be slender.

Other dogs, such as the Cane Corso and American Bulldog, are often mistaken for Pitbulls but have different breed histories. Even experts sometimes misidentify similar-looking dogs as Pitbulls.

The APBT is a purebred dog recognized by the United Kennel Club (UKC), though not the American Kennel Club (AKC). They are the tallest of the Pitbulls, with adults attaining heights of 17-21 inches at the shoulder. They are the leanest Pitbulls weighing between 30 and 60 pounds. After being brought to the Americas, these tall, athletic canines were often used as ranching dogs.

American Pitbulls have a wide variety of coat colors and are identified as “red-nose,” “blue-nose,” and “black-nose,” rather than by coat colors. Red-nose APBTs have red noses and lips and brown to reddish-brown or chestnut coats. Blue-nose Pitbulls have blue-gray coats, mouths, and noses.

Red and blue-nose Pitbulls are rarer than black-nose Pitbulls, and usually command a higher price than black-nosed Pitbulls. Unethical breeders may, therefore, not always follow sound breeding practices to achieve these colors. That said, you should always ensure that you purchase your dogs from reputable breeders.

The American Staffordshire Terrier is a shorter, stockier dog than the American Pitbull, with an adult height of 17 to 19 inches and an adult weight of 40 to 70 pounds. AmStaffs, as their fans know them, are classified as medium-sized dogs, though they fall on the larger end of that classification. This is in contrast with the American Pitbull, who falls under the large-size dog category.

The Staffordshire bull terrier is the smallest of the Pitbulls, with adults attaining heights of about 14 to 16 inches. These dogs are powerfully and broadly built, weighing anything from 25 to nearly 40 pounds.

Nicknamed “Staffie” or “Stafford ” by their loving fur parents, these dogs can be strong-willed. In addition, their smaller frame makes it harder to train them than the larger Pitbull varieties. Properly socialized Staffies are affectionate companions to their fur parents but may be indifferent, or even unfriendly, to other dogs.

The UKC recognized the American Bully in 2013. An adult American Bully stands 16 to 20 inches at the shoulder and weighs between 30 and 55 pounds. This dog is broadly-built with a blocky or square muzzle. Though American Bullies can look intimidating, they were specifically bred as pets. The Bullies, as their fans call them, are usually friendly, outgoing dogs.

Although initially bred in the late 1800s for their strength and stamina, both of which they exhibited in blood sports like bear and bull-baiting, Pitbulls that were aggressive towards people were always classified as undesirable dogs.

Even during those early, bloody days, a Pitbull that bit their handler would not be intentionally bred. As odd as it may seem, Pitbulls were intended to be loyal, obedient dogs to their owners.

Over time, as blood sports were outlawed and illegal dog-fights became less frequent, the American Pitbull’s temperament became friendlier with other dogs as well with humans. Pitbulls were even used to keep children safe and entertained. Because of this, the breed was nicknamed “The Nanny Dog.” In the US, Pitbulls gained popularity during World War II because they were seen as an “every man’s” working dog.

Pitbulls enjoyed popularity as pets in the US until the 1970s when illegal dog-fighting operations were brought into the public eye. Due to their strength and tenacity, and their history as “blood-sport” dogs, Pitbulls were commonly used for dog-fighting.

Repeated images of dog-fighting Pitbulls in the news led to stereotyping Pitbulls as aggressive dogs. This overshadowed their initial popularity as nanny dogs, movie comedians, and the common man’s companion-of-choice.

Pitbull aficionados have endeavored to re-establish a positive reputation for these dogs. Most modern Pitbulls, when adequately trained and socialized, are affectionate, even snuggly, animals.

When evaluated by the American Temperament Test Society, Pitbulls showed an impressive 86% pass rate, roughly equal to the Golden Retriever. Although they can be aloof towards other dogs and protective of their human family, especially the family’s children, they can make excellent family dogs.

As discussed previously, many Pitbulls are also friendly with other dogs. However, since they have a high prey-drive, they should be kept on a leash in public areas to avoid aggressive interactions with cats or smaller dogs. In any case, this is most often true for any breed with a high prey drive. Keeping your dog leashed in public is advisable regardless of the breed, for everyone’s safety.

Pitbulls are eager to please their owners and are sometimes seen as the dog world’s clowns. They are highly intelligent dogs and love a little fun and games.

You can expect a healthy Pitbull’s lifespan to get to 15 years, though some healthy Pitbulls may cross the rainbow bridge as young as eight years, while some may live much longer.

Taking good care of Pitbull puppies from their earliest stages can help them live a long life. Proper socialization, training, nutrition, and exercise are the keys to ensuring your American Pitbull is with you for years. Like with all dogs, regular veterinary care is crucial for general wellness and illness prevention. This professional care also provides your puppy with the best healing chances in the case of illness or injury.

Like all dogs, American Pitbulls must be vaccinated to prevent infections such as parvo and rabies. Just as with other purebred dogs, there are also breed-specific concerns. Obesity is a common health issue for adult Pitbulls, and being overweight can exacerbate other breed-specific health challenges. These include heart disease, high blood pressure, and hip dysplasia.

These dogs can be very muscular, stocky when not overweight. If you think your Pitbull puppy is overweight or underweight, ask your veterinarian. Changes in care for weight-maintenance should only be undertaken under the direction of your veterinarian.

American pitbull terriers have a long history of being loyal, courageous companions. With proper care and socialization, you can have a well-trained, happy, healthy American Pitbull puppy. This will help your puppy become a happy, healthy adult dog. 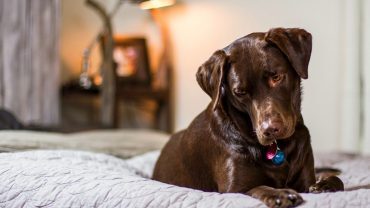