Spaniels have been historically bred to be athletic, small, and enthusiastic companions. They love to go with their owners on hunts, and they are great at finding and flushing out game. They make for excellent hunting partners due to their patient and inquisitive nature, which allows them to easily find game.

More importantly, they are able to move across different kinds of terrains, including water as well. Even today, spaniels are used for hunting, and they are quite famous for the affection and loyalty that they show to their owners. There are a few things that you should know about the characteristics of the breed that all spaniels share.

First of all, you should know that despite their diminutive size, spaniels have lots of energy packed into their tiny frames. They are incredibly driven and highly agile, and love jumping around. If you live with an active group of people, you are going to have a lot of fun with this breed.

Most spaniels are generally of a medium size, and you should know that problems are likely to occur if your dog does not get an adequate amount of exercise. They love taking part in competitive sports as well. In most cases, spaniels generally have a broad muzzle, and usually have a silky coat on their legs, tail, and ears. Many spaniels also have longer, droopy ears, though they are more prone to infections as well.

You should also know that these dogs can suffer from separation anxiety if you leave the animal on its own for a longer period of time. Now that you understand the major characteristics of the spaniel breed, here are some of the most popular types of spaniels that you can get.

Known for its long ears and cute face, the American cocker spaniel is one of the most popular dogs. It is also one of the smallest breeds recognized by the American Kennel Club. Despite their small size, these dogs have a very lively personality, and they love to cuddle up to their owners. It’s one of the main reasons why they are loved so much and are so popular among dog aficionados.

You should know that this is a very smart animal, and it can easily take part in different kinds of races and sporting events. If you are looking for a dog that’s never going to bore you and will always keep you entertained, you simply can’t go wrong with the American cocker spaniel. It can also live easily in an apartment because of its small size. However, you should know that this is an athletic dog.

You will want to take it out for a walk at least once a day, and run around with the animal for at least an hour or so. They have a long coat that’s going to require quite a bit of maintenance, and you will want to make sure that you take it to the grooming salon every once in a while. You also have the option of clipping it short permanently. These dogs have a life expectancy of around 15 years.

The Cavalier King Charles Spaniel was recognized officially by the American Kennel Club in 1995. This makes it a relatively recent breed, though you should know that it’s been around for much longer than that. In fact, the King Charles Spaniel is the most popular type of spaniel in the United States. They are generally known for their affectionate and sociable nature, and they love traveling with their owners.

This is a very curious dog with a subdued energy, so you don’t have to worry about the animal tearing through your sofas if it doesn’t get its way. It’s also incredibly loyal to its owners, and they are always eager to please. The King Charles Spaniel was bred for the British nobles and royalty, and has many characteristics that indicate its noble heritage.

They love to be around their owners, and that is why they make for such excellent apartment companions.

They have beautiful, loving eyes, and a very silky coat that feels amazing to touch. They are immensely affectionate toward their family, and they love to spend time around them. They are also great around kids. However, this dog will suffer from separation anxiety if left alone for too long. Therefore, it’s best to get one if you are going to keep it in a house with company throughout the day.

They are very similar in terms of characteristics to the American cocker, but they are slightly more agile and active. Because of their hunting drive, it’s best to keep the animal on a leash otherwise it’s going to run away at any opportunity that it gets.

This might come as a surprise to most people, but the papillon is a spaniel too. It’s a toy breed with an incredibly cute face, and when it was first bred, the animal used to have dropped ears. However, with selective breeding, it got raised butterfly ears, and that’s why it’s commonly known as the continental toy spaniel. It’s a small, cute dog that is going to make for an excellent pet.

However, you should know that the papillon is not just a lapdog that you can show around to your friends. They are incredibly alert and active, and need lots of exercise as well. The best part about the papillon is that it is highly trainable and has one of the smartest minds among other toy breeds. They also like to bark much louder than you might think, so it’s important that you train the animal from an early age.

The papillon requires its exercise and will make for a loving companion as long as its needs are met. It’s a very affectionate dog and won’t miss any opportunity to express its love to you. These are just a few of the many types of spaniels that you can choose from. 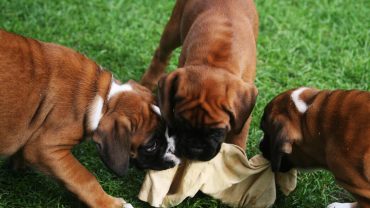